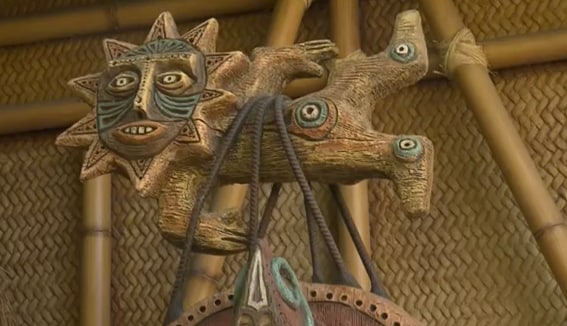 With the 50th anniversary of Walt Disney’s Enchanted Tiki Room coming up this Sunday, June 23, I wanted to take a few minutes for you to meet some friends of mine. I’ve spent many an afternoon sharing a Dole Whip and friendly conversation with these wooden residents of the garden outside the Enchanted Tiki Room, watching them come to life and introduce themselves. Let’s meet the Tiki gods of the Enchanted Tiki Garden:

While these Tiki carvings were based on legends of the South Pacific, a few of our own Disney Legends worked on the Tiki gods you find in the Enchanted Tiki Garden. They were primarily designed by Imagineers Marc Davis and Rolly Crump. The plaques and dialogue were written by Marty Sklar, who went on to become vice chairman and principal creative executive at Walt Disney Imagineering.

I think my favorite Tiki god is poor Ngendei – I mean, who hasn’t felt like you were “just hanging on”? Which is your favorite? Let us know in the comments!

Stay tuned to the Disney Parks Blog over the next few days, as we bring you even more features in celebration of the 50th Anniversary of Walt Disney’s Enchanted Tiki Room!

For more from Walt Disney’s Enchanted Tiki Room at Disney Parks, read the posts below: