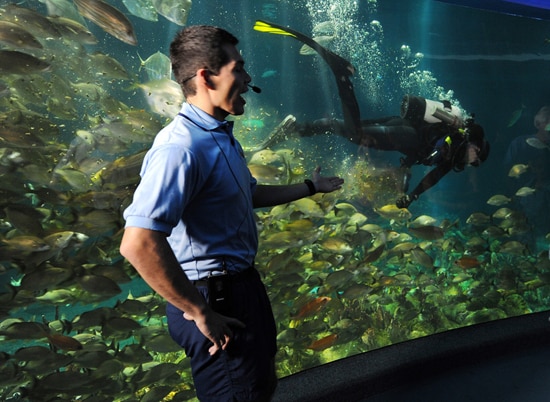 Join Nemo, Dory, Crush and the rest of the gang in celebrating the wonders of the oceans on World Oceans Day at The Seas with Nemo & Friends at Epcot on June 8. There’s a host of special activities:

Surrounded by the Pacific in Hawaii, Aulani, A Disney Resort & Spa, is joining the World Oceans Day celebration with special ocean-themed activities for guests. And, in addition to supporting conservation year-round, the resort is contributing a portion of the proceeds on June 8 from the Rainbow Reef snorkeling experience to the Disney Worldwide Conservation Fund, which helps to protect wildlife on land and in the oceans around the world.

On World Oceans Day, and every day, it’s important to remember that no matter where we live we are all connected to the oceans—any action we take that reduces waste (including recycling everything possible), saves water or keeps it clean, protects ocean wildlife or reduces emissions helps our oceans.

At The Seas with Nemo & Friends at Epcot –