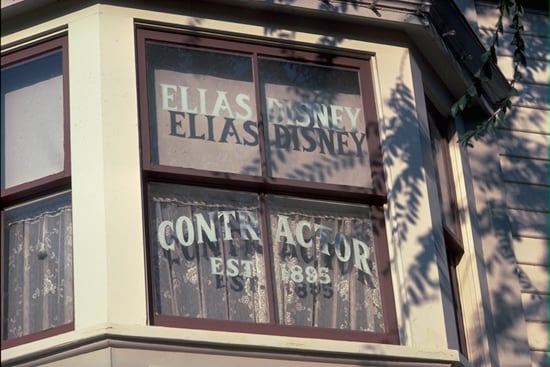 There have been lots of “Disney Dads,” and as Father’s Day approaches, I chose to feature the one I would call the original, Elias Disney, father of Walt and Roy Disney. Elias was a strict disciplinarian, yet very devoted to his wife and children. Despite his stern demeanor, the Disney brothers had great respect and affection for their father, and as a result, Walt honored Elias with a window on Main Street, U.S.A., on July 17, 1955, the opening day of Disneyland park.

Elias, the son of Irish immigrants, was born in Canada on February 6, 1859. While still in his teens, he moved with his family to the United States and settled in Ellis, Kan. Several years later, tired of the brutal winter weather, Elias and his father, Kepple, travelled to Florida to look at land with neighbors Charles and Henrietta Call.

On January 1, 1888, Elias married Charles and Henrietta’s daughter, Flora Call, in Kismet, Fla., just 50 miles north of the land on which Walt Disney World Resort would eventually be built. Elias tried his luck growing oranges and delivering mail in Florida, and when that didn’t work out, the couple moved to Chicago. There, Elias started a contracting business where he built houses which Flora helped design.

In Chicago, Elias met and befriended Walter Parr, a minister at St. Paul Congregational Church. In 1901, when both Flora and Walter Parr’s wife were pregnant, Elias made a proposal to Parr that if he had a baby boy, he would name him Walter and if Parr had a boy, he would be named Elias. On December 5, Elias and Flora had their fourth son and Elias kept his bargain with Parr by naming him Walter Elias Disney. The Parr baby was also a boy and he was named Elias.

In 1906, Elias was worried about the rising crime in Chicago, so he moved the family to a farm in Marceline, Mo. It was here that the young Walt grew up and developed his love for animals and the rural life that would be so evident in his films. The Disney family remained in Marceline for four years, before moving to Kansas City in 1910.

In Kansas City, Elias bought a newspaper delivery route. Walt delivered newspapers for his father while attending Benton School. In 1912, Elias acquired shares in the O-Zell jelly and fruit juice company of Chicago and five years later moved his family back to the city, where Walt began his freshman year at McKinley High School and took night courses at the Chicago Academy of Fine Arts.

In the late 1930’s, Elias and Flora moved to North Hollywood to be near Walt and Roy. Elias died on September 13, 1941. His window on Main Street is located above the Emporium and has the brief inscription: Elias Disney, Contractor, Est. 1895. It is believed that 1895 represents the year Elias began working as a contractor.