Actor Gilles Marini, who kicked up his heels a few times on “Dancing with the Stars,” got his kicks today at ESPN Wide World of Sports Complex.

Mickey Mouse, clad in his favorite soccer uniform, joined in the fitness fun as Gilles demonstrated some of his soccer skills for our cameras and the impromptu crowd that gathered. A big fan of the sport, Gilles has played amateur soccer in California while continuing his successful acting career. 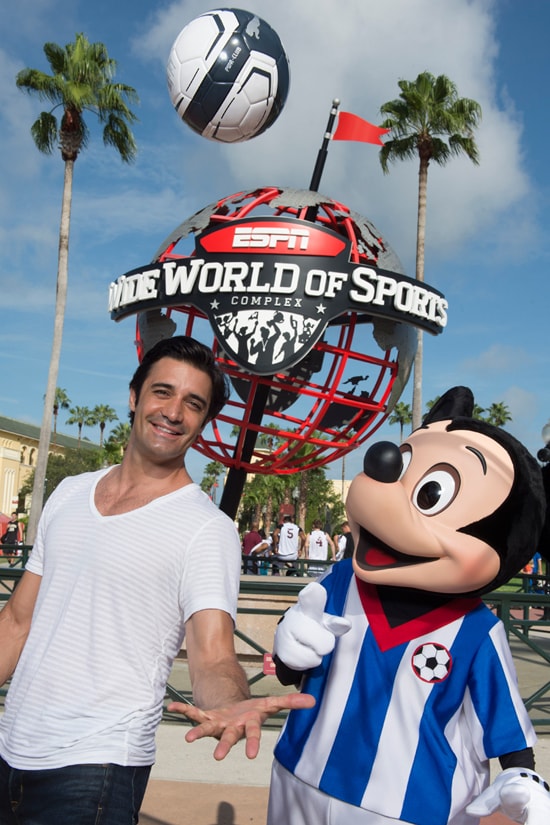 Born in France, Gilles began his show business career in modeling after serving in the French Army. After a photographer discovered him, Gilles moved to the U.S. following the fulfillment of his military duties. While modeling, he began his acting career and has starred on TV shows, including “Brothers & Sisters” on ABC. He became a fan favorite for his dancing skills on the hit competition series “Dancing with the Stars,” and currently appears on the ABC Family series “Switched at Birth.”

After today’s photo shoot with Mickey, Gilles stayed and took photos with several amateur teams who were arriving to compete in the 2013 Champion ESPN Games.

ESPN Wide World of Sports Complex, which hosts more than 300 events a year, is the leading multi-sport venue for amateur and professional sports in the United States, accommodating 70 different sports and athletes from more than 70 countries.