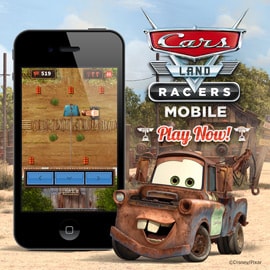 The new mobile edition also comes with its own rewards. If you play the game while you are inside Cars Land at Disney California Adventure park, you will be able to earn three special achievements! And, if you are logged in through Facebook, you can unlock upgrades and achievements that will be reflected on the desktop version of the game, allowing you to fast-track racing upgrades.