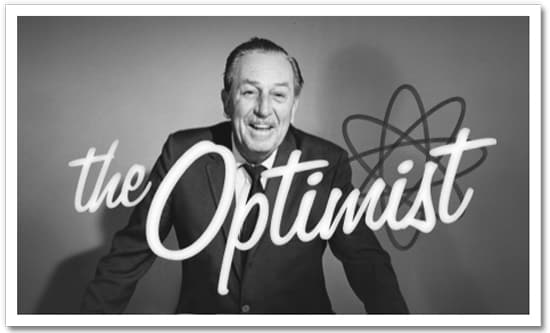 Of all the ways to describe Walt Disney — dreamer, innovator, filmmaker, television pioneer, theme park creator — perhaps “visionary idealist” is the most intriguing. That trait takes center stage in “The Optimist,” a new alternate-reality game presented through a partnership between Walt Disney Imagineering Research & Development and The Walt Disney Studios.

In this narrative adventure, participants around the globe linked by social media will join fictional characters to explore both virtual and physical realms, piecing together an imagined story of Walt Disney, the Imagineers and other visionary thinkers and their potential involvement in a secret project that sought to build a better future.

“In this alternate reality experience, one of our characters has discovered some previously unknown facts that could change what we think we know about Walt Disney, Imagineering and Disneyland park,” said Scott Trowbridge, head of Walt Disney Imagineering Research & Development. “Players can participate at different levels of engagement over the six-week story — from leveraging social media and mobile devices to visiting unique physical sites from the story in and around Los Angeles.”

While some characters and situations in “The Optimist” are based on real people and events, Scott noted that the overall experience is fictitious and does not intend to represent historical accuracy. The experience culminates at the ultimate Disney fan event, D23 Expo in Anaheim, Calif., August 9-11, 2013.

“At Imagineering, we are constantly exploring and developing new ways to engage our guests in compelling, interactive experiences,” Scott said. “With ‘The Optimist,’ we are excited to connect people with each other around the world to uncover a story that seems so unbelievable — and at the same time, so encouraging — that it could only come from Disney.”

Visit optimist.disney.com to learn more about the experience and get started.