August is a special month for one of the most beloved attractions at Disney Parks – the Haunted Mansion. The delightfully amazing attraction opened on August 9, 1969 at Disneyland park. To commemorate the anniversary this year, the Disney Parks online store is releasing an online exclusive shirt for one week only starting August 8, 2013. The shirt features a nod to the attraction’s rich history by including an image of the Hatbox Ghost. I spoke with Disney Design Group artist Casey Jones in his office about the creation of this shirt. 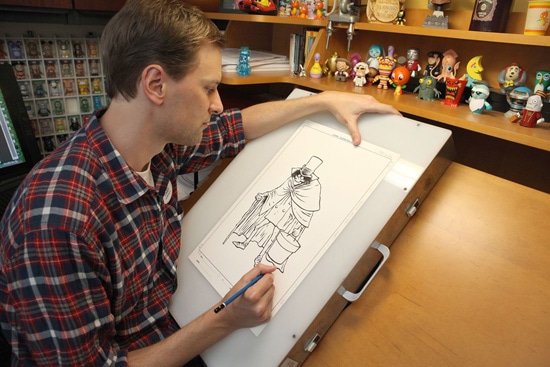 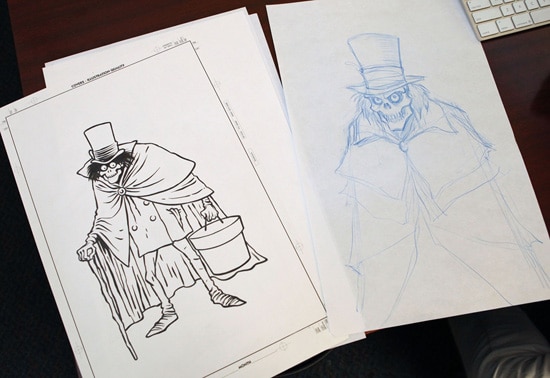 “We have been planning to release this shirt for about a year,” explained Casey. “The graphic is based on the wonderful artwork found in ‘The Story and Song of The Haunted Mansion.’ We had based the packaging artwork for the Haunted Mansion Vinylmation series on the album cover. Disney Artist Thomas Scott had recreated that vintage Haunted Mansion logo, so I used that for this shirt, too.” To create the Hatbox Ghost artwork, Casey worked traditionally with pencil on Bristol board. He later inked the drawing with a brush. The coolest part of our interview was seeing the original sketches he made for the design (how I wish I could draw more than a stick figure!). “We like creating authentic designs inspired by things guests experience at Disney Parks,” continued Casey. “We partnered with the Walt Disney Archives to gather reference material for this Haunted Mansion shirt as well as other classic attractions at Disney Parks. That reference material will be used to create future online exclusive tees that I think people will love.”

The Hatbox Ghost shirt will be sold online only at www.Disneystore.com/ParkEvents from August 8 through August 15. Once orders are complete, please allow six-to-eight weeks for delivery.

Happy anniversary to the 999 Happy Haunts!