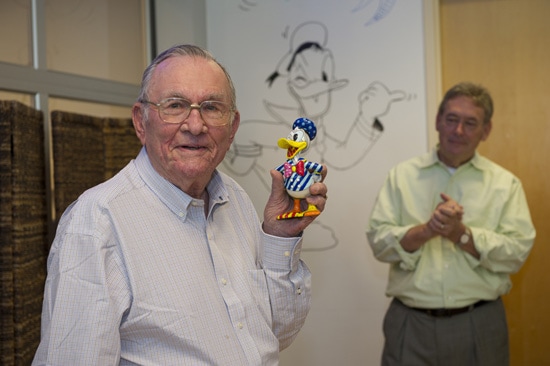 Ridgway retired from Walt Disney World Resort, but his presence lives on in the Walt Disney World PR staff and throughout the world as his team of trained publicists have scattered far and wide. He was recognized as a prestigious “Disney Legend” in 1999, an award for extraordinary contributions to The Walt Disney Company.

WHEREAS, on July 20, 1923, Charles Baxter Ridgway was born to Angie and Frank Ridgway in Chicago, Illinois, and

WHEREAS, Charles earned a degree in journalism and distinguished himself academically at The University of Missouri after serving in World War II, and

WHEREAS, Charles and his wife, Gretta, were married in April 1948, lived together in four states and one European country, and

WHEREAS, Charles is well known as a person of exceptional integrity, skill, intellectual prowess, honesty and loyalty, and an exceptional world traveler, and

WHEREAS, Charles wrote an article for the Los Angeles Mirror News featuring the highlights of the opening of Disneyland on July 17, 1955, which began his over 40 year career with The Walt Disney Company, and

WHEREAS, Charles educated and enlightened the journalists in the Central Florida community, the State of Florida, United States and worldwide, and was a life time member of the Society of American Travel Writers, and

WHEREAS, Charles and his Disney team of professionals wrote, created and managed the publicity for the opening of Walt Disney World’s Magic Kingdom in October 1971, including directing the photograph of the entire Disney cast in front of the castle for the October 15, 1971 LIFE magazine cover; EPCOT in October 1982; Disney-MGM Studios in May 1989; and Animal Kingdom in April 1998, and

WHEREAS, Charles was recognized in as a Disney Legend in 1999, a program recognizing people who have made an extraordinary and integral contribution to The Walt Disney Company, and

WHEREAS, Charles and his professional team managed the publicity for the opening of Euro Disney in April 1992, after having lived in Paris with his loving wife for a year, and collaborated on the opening day press booklet for Tokyo Disneyland in 1983 and Hong Kong Disneyland in September 2005, and

WHEREAS, Charles wrote Spinning Disney’s World, a collection of memories of working with Walt Disney and his company, which was published and sold beginning in 2007, and

WHEREAS, Charles’ family and friends, have arranged to come together to celebrate his 90th birthday,

NOW, THEREFORE, I, BUDDY DYER, Mayor of the City of Orlando, hereby honor Charles B. Ridgway for his 90th birthday, and proclaim July 26, 2013 as

“Charles Ridgway Day”
in the City of Orlando.