In 1982 the first Sony CD player was released, Epcot Center opened and Prince William was born. It was also the year that “Wholesale Leather Goods” made its debut at The Disney Village. (I could still show my age using the digits on just one hand, so yeah, it was awhile ago.)

Fast-forward to present day and at least one thing hasn’t changed – Dave Biebel is still making leather belts with the same level of craftsmanship guests have come to expect over the last three decades. Though it’s an anomaly in today’s mass-produced market, he has no plans to change. And why should he? His goods are unique, personalized and in many cases, one-of-a-kind. 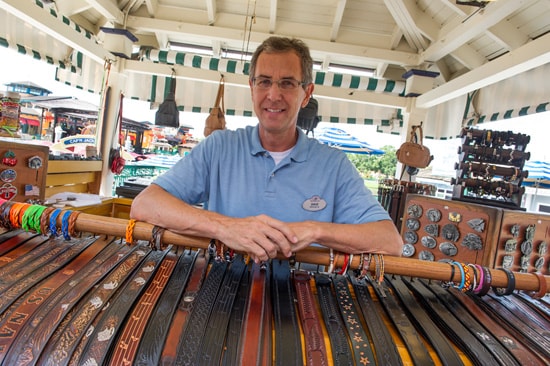 I recently had the chance to talk with Dave; of all his stories, I most loved the one about the man who visited his location a few months ago. As Dave shared, “this guy came back with a belt he said he bought from me 30 years ago. It featured my stamped design, and I could tell it was the same end-cutter I’ve always used, so I figured he must have really gotten it from me. He got 30 years out of it. I wasn’t surprised when he bought another one.”

What surprised me? Dave never set out to make this his life’s work. He was working part-time when his boss was approached by Disney to open a small merchandise location at The Disney Village. Dave gave it a shot, Epcot opened shortly afterward and then “things got very busy.” The rest is history. For Dave, the best part of his job is getting compliments on his work. Guests love the fact that his merchandise is handmade and because of that, he gets lots of repeat customers. Some have told Dave it’s the “only place” they’ll buy their belts.

If belts aren’t your thing, you can also find a wide array of buckles, necklaces, bracelets, wallets and my favorite – purses.

It’s now 2013 … smart phones hold full music libraries, we now boast four Walt Disney World Resort theme parks and Prince William just had a son of his own. A lot has changed but at least one thing hasn’t – look for Dave and his wares at Downtown Disney Marketplace near LittleMissMatched and the Marketplace Marina.

Have you kept any of your purchases from past Disney Parks vacations for 30 or more years? If so, I’d love to hear about them in the comments below. I bet they hold a special place in your heart!