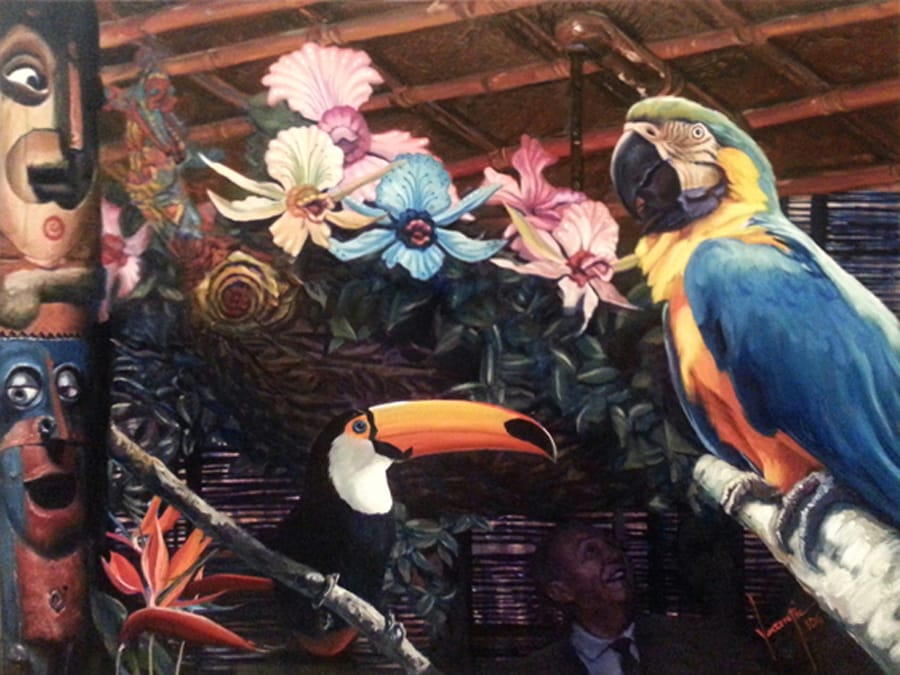 How many of you have already had the chance to swing by the new Disney Gallery location inside The Disneyland Story presenting Great Moments with Mr. Lincoln at Disneyland park?

Gracing the walls of the new location are conceptual and definitive works of art themed to the new exhibit titled Tiki, Tiki, Tiki Realms, Celebrating 50 years of Enchantment. Here are some of the images from the Walt Disney Imagineering Art Library that you can expect to see on display in this exhibit.

The Enchanted Tiki Room attraction began with a bird. During a trip to New Orleans, Walt Disney came upon a mechanical singing bird in a collectibles shop. He brought it home and with the help of his Imagineers, set about figuring out how it worked and how he could improve it.

While his Imagineers worked on building a better bird, Walt began developing an idea for a table service restaurant in Adventureland called the Tiki Room. Here guests would watch these mechanical birds perform as part of a dinner show. That idea evolved into the Enchanted Tiki Room, the beloved Disneyland show that introduced the world to a new kind of storytelling technology: Audio-Animatronics figures.

Celebrating its 50th anniversary this year, the Enchanted Tiki Room still charms and delights diverse audiences of all ages with its simple story, clever jokes and catchy songs performed by more than 200 Audio-Animatronics birds, tiki figures, tiki masks and flowers. Now, The Walt Disney Story welcomes you to enjoy the art, stories and bits of enchantment that have brought Polynesian paradises to life at Disney Parks around the world.

What else can you expect to find? Adjacent to The Disney Gallery is now the Disneyana Shop. Look for “Enchanted Interpretations” by many Disney-inspired artists, which will surely offer you a new birds-eye view of this classic Disney attraction.

As the Walt Disney Imagineering team explained, legendary Imagineer John Hench once recalled using visualization to design the interior of the Enchanted Tiki Room. He had envisioned a single Audio-Animatronics bird singing in a central space, followed by other birds, flowers and carved tiki figures joining in on a lively jam session that filled the room.

With the help of dedicated Imagineers, that vision first came to life at Disneyland. Since its debut, the Enchanted Tiki Room went on to inspire other attractions which featured Audio-Animatronics figures, such as Great Moments with Mr. Lincoln and Pirates of the Caribbean. The innovative attraction did more than push Imagineers to further develop an exciting technology; it has inspired a new generation of artists to reinterpret favorite characters and moments from the groundbreaking show.

Popular artists with fond memories of the Enchanted Tiki Room have since taken that original vision of Walt, John Hench, Rolly Crump and other Imagineers, and put their own spin on paradise. Now we are proud to present art and collectibles as vibrant and unique as the classic Disney attraction that inspired them.

Will you fly by and check it out?