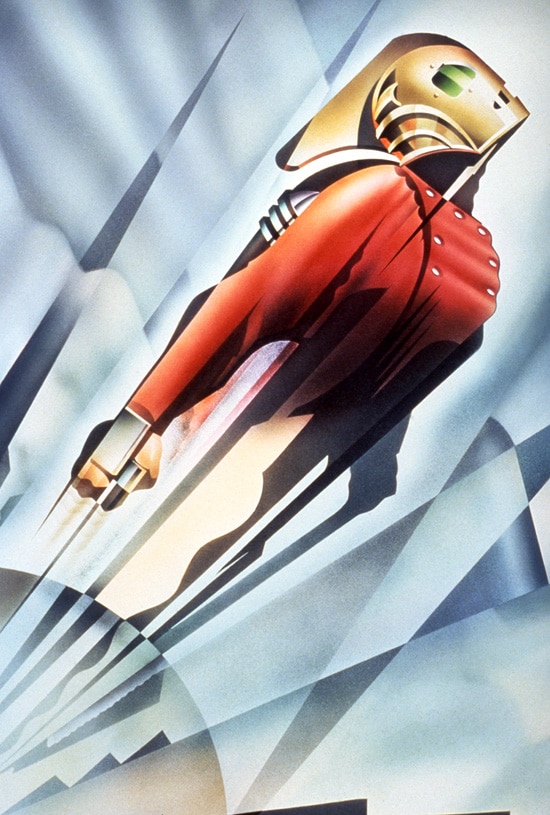 Today in Disney History: The Rocketeer Flies at the Walt Disney World Resort

Who else loved the movie “The Rocketeer”?

This 1991 film took us back to the 1930s to tell the story of a rookie pilot named Cliff, who, with the help of a mysterious jet pack, became a “high-flying” hero, battling gangsters and spies in Hollywood. The movie starred Billy Campbell, Jennifer Connelly, Alan Arkin, Timothy Dalton and Terry O’Quinn, among others.

If you’re a fan of this film, then check out the amazing photos we just found in our archives. During the summer of 1991, the nightly Sorcery in the Sky Fireworks at Disney’s Hollywood Studios was enhanced to feature a special scene to promote “The Rocketeer.” The show began with a musical tribute to the Golden Age of Hollywood, and just as the music transitioned to become more modern, the Rocketeer appeared on a platform in front of the Chinese Theater to chants of “Rocketeer! Rocketeer!” He then ignited his jetpack and swirled about high up in front of the theater.

This special addition to Sorcery in the Sky Fireworks only lasted one summer. Were you lucky enough to see it? Tell us in the “Comments” section below.