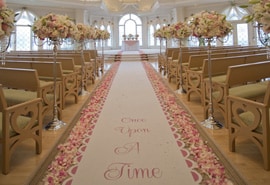 This week back in 1995, Disney’s Fairy Tale Weddings officially opened Disney’s Wedding Pavilion located on the banks of the Seven Seas Lagoon. Here’s a look at an early rendering of the pavilion prior to opening and then just after its completion in 1995.

Home to magical weddings year-round, Disney’s Wedding Pavilion can seat up to 300 guests and has an aisle that stretches 75 feet. The pavilion received some TLC back in 2012 that included the installation of new stained glass windows, carpet, and reupholstered pews. Below is a comparison of the inside of the pavilion in 1995 and the pavilion today.

The first official wedding at Disney’s Wedding Pavilion was held in June of 1995 and appeared on “Weddings of a Lifetime,” a television special on the Lifetime network. Disney’s Fairy Tale Weddings has created over 40,000 happily-ever-afters since its inception in 1991. Now that’s a lot of love.

For more on Disney Weddings & Honeymoons, read the posts below: