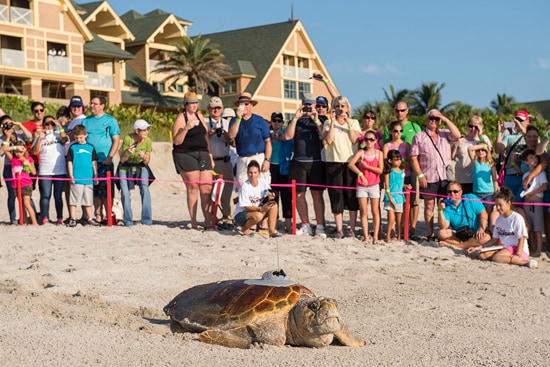 Last Saturday morning, Disney’s Vero Beach Resort guests connected with nature in a way that few people get to experience when they cheered on two giant, loggerhead sea turtles named for Disney characters – who had laid their eggs on the beach the night before – as they returned to the sea. The turtles were fitted with satellite transmitters and released near the resort as part of the Sea Turtle Conservancy’s annual “Tour de Turtles,” which follows the marathon migration of 11 sea turtles from their nesting beaches to their foraging grounds.

The sea turtles, Carrie (sponsored by Disney’s Animal Programs and Disney’s Vero Beach Resort) and Claire (sponsored by the Disney Worldwide Conservation Fund), were named for two of the characters in the Disney•Pixar film “Monsters University.” Sea turtles face monstrous challenges throughout their lifetime, but all of us can help. 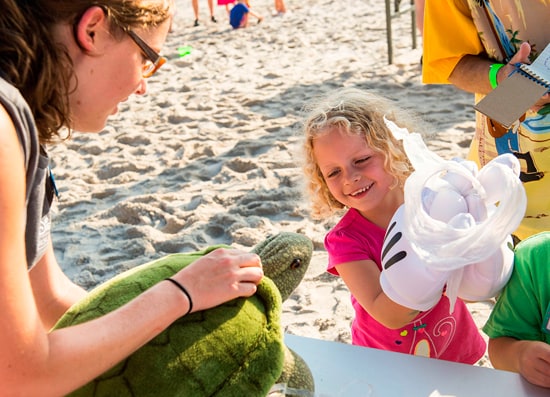 Each turtle in Tour de Turtles acts as an ambassador to raise awareness about a specific threat to sea turtles. Carrie is raising awareness about the threat of light pollution on the beach. Since sea turtle hatchlings rely on moonlight to find their way to the ocean, many become disoriented and drawn off-course by artificial light sources. We can help by turning off unnecessary lights that may be visible on nesting beaches. Claire is raising awareness about the threat of plastic debris. Many turtles have been killed by swallowing or becoming entangled in plastic debris, including plastic bags and fishing lines. We can help by recycling and putting trash in appropriate containers. Watch the video to see the huge send-off by more than 600 guests and cast members, including children from the local Boys & Girls Club, our Walt Disney World Ambassadors and Disney VoluntEARS.