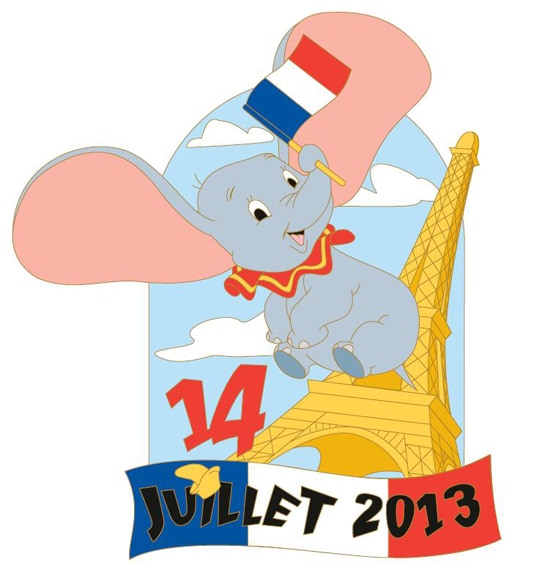 Window Shopping at Disney Parks Around the World: A Summer Trip to Disneyland Paris

It’s time to rack up some more virtual frequent flyer miles, as this “Window Shopping” expedition takes us back to Disneyland Paris. I asked my good friend, Junior Product Developer and 2011-2012 Disneyland Paris Ambassador, Regis Alart, what new and exciting things were debuting during the extended 20th Anniversary celebration. Here’s what he sent my way.

Disneyland Paris recently debuted their own version of “Glow With the Show” Ears, called Disney Light’Ears. Watch in amazement as the ears sync to the sights and sounds of Disney Dreams! and bring it to life in a dazzling new way. Take a look!

If you are wondering where you can find them during your next visit, they should be as close as Main Street, U.S.A., and will be about €20.

Now if pin collecting is more your style, then take a look at the art for these next few releases.

First up is a pin created in celebration of Bastille Day! While the actual holiday is July 14, look for the release of the limited edition 600 pin featuring Dumbo to occur on July 6 throughout the resort. How much is it? Only €12.99.

Up next is a special release, as it commemorates the first anniversary opening of the World of Disney Store. Available on July 12 as part of this special celebration is a limited edition 600 pin for €12.99, and two deluxe prints (€69.00) which exquisitely capture the painted murals from the Disney Village flagship store. Look for this and more only at World of Disney Store.

Finally, if action and adventure is what you seek, then this 1993–2013 Indiana Jones and the Temple of Peril (or Indiana Jones et le Temple Du Peril) attraction pin is the treasure you have been looking for. The limited edition 600 pin will be available at Disneyland Paris for €12.99 on July 27 at Pueblo Trading Post in Frontierland. Just a quick reminder, even though most of the merchandise highlighted in our “Window Shopping” trip posts will not be available to purchase online, in this particular case there is an exception. Guests who wish to inquire about remaining quantities of these pins may do so with the Merchandise Guest Services team at Disneyland Paris via dlp.pintrading.mail.order@disney.com, one month after each release.

Likes (0)
Share Window Shopping at Disney Parks Around the World: A Summer Trip to Disneyland Paris