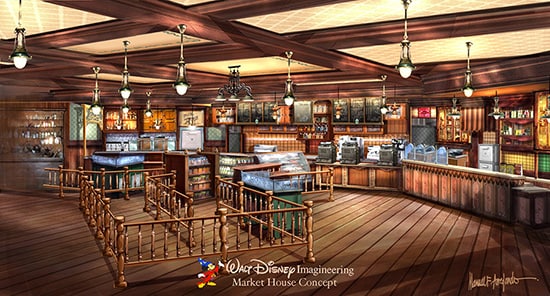 This morning, Walt Disney Imagineering added new renderings to Blue Sky Cellar at Disney California Adventure park, updating guests on the expansions of both Aulani, a Disney Resort & Spa, and the new Market House, which will open in September on Main Street, U.S.A., at Disneyland park, serving Starbucks products and a selection of specialty Disney pastries.

Above is one of the renderings included in the update, which gives you a little peek at what Market House will look like when it opens. As you can see, it will remain themed as a turn-of-the-century general store – and yes, the stove will be there, too!

The new Aulani renderings give guests a detailed look at the new Ka Maka Landing, part of the ongoing expansion at the resort in Hawai`i. You can see these new renderings for yourself inside Blue Sky Cellar now, which will be followed by a larger update this fall.