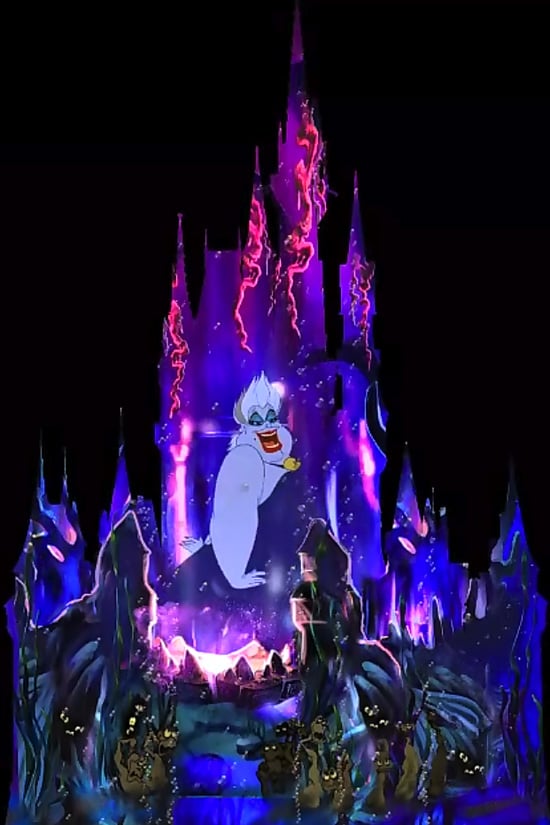 I can hardly believe it’s been a year since we shared with you the first details about “Celebrate the Magic,” the spectacular nighttime projection show at Magic Kingdom Park that transforms Cinderella Castle with unforgettable moments of Disney imagination and storytelling. Since that time, the show has been enhanced with the inclusion of special sequences celebrating winter holidays and summer vacations. Today, I’m thrilled to give you a sneak peek at the next seasonal update for “Celebrate the Magic,” just in time for Halloween.

This new segment of “Celebrate the Magic” places the Disney villains center stage. From the sea witch Ursula, lording over the poor unfortunate souls trapped in her underwater lair, to the demon Chernabog from Walt Disney’s “Fantasia,” spreading his wings across the face of Cinderella Castle, it promises to be a particularly dark and foreboding chapter. Things heat up as Maleficent casts a forest of thorns around the base of the castle, and then transforms into a wicked, fire-breathing dragon who threatens to destroy the very magic we’ve come to celebrate. Fear not, though. As with all great Disney stories, this one is sure to have a happy ending.

The new Disney villains sequence makes its debut this Sunday night, September 1, during performances of “Celebrate the Magic,” and will be part of the show for a limited time, through November 1, 2013.

Check out more posts about Halloween celebrations at Disney Parks: