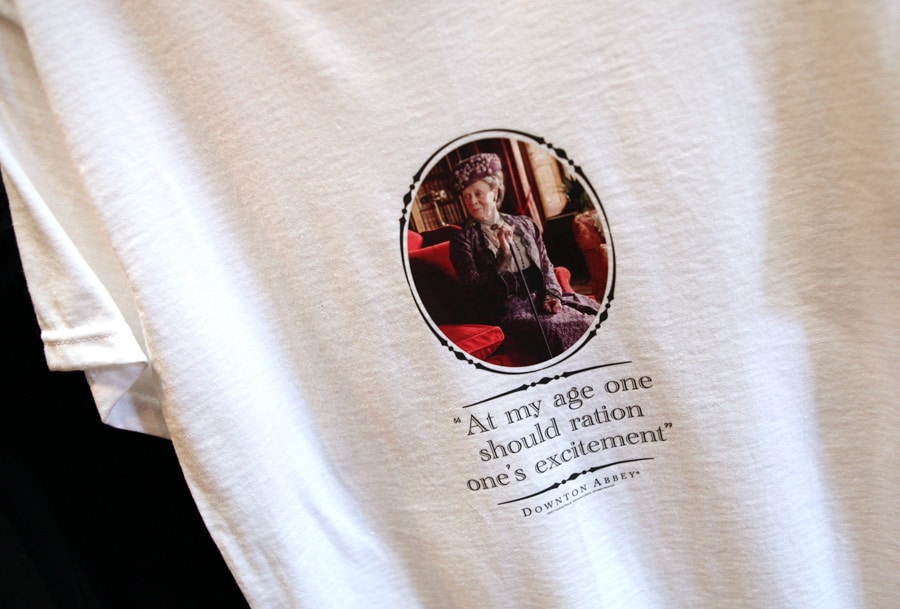 Though Disney Parks Merchandise updates usually come from my friends Michelle, Steven and Erin, I begged them to let me show you these items available at the United Kingdom Pavilion at Epcot. Why? Because, as a huge “Downton Abbey” fan, there are a few items I am particularly excited about.

Just like it seems a pity to miss a good pudding, it would be a pity to miss these “Downton Abbey”-inspired t-shirts, including my favorite – featuring the Dowager Countess herself.

And while Violet Crawley thinks no one wants to kiss a girl in black, I don’t think that applies to these “Doctor Who”-inspired items for you Whovians …

The display has been expanded to include new mugs, posters and apparel, including this jolly TARDIS scarf.

And since she believes “life is a game in which the player must appear ridiculous,” I think even the Dowager Countess herself would appreciate these “Monty Python’s Flying Circus”-inspired T-shirts.

So ask Branson – I mean, Tom – to bring the motor ‘round and make your way to the Sportsman’s Shoppe, located across from the Rose & Crown Pub in the United Kingdom Pavilion, for these and many more items for my fellow fans of British television.