Growing up I played everything from Atari to Nintendo to the Wii. I certainly have my favorites (cough… Ms. PacMan and Super Mario Bros.) but just when I thought it couldn’t get any better, the folks at Disney Interactive pulled out all the stops, and I’m pretty sure Disney Infinity is going to skyrocket to the top of the list.

Disney Infinity is an all new gaming experience that unlocks the freedom to create stories and play experiences starring beloved characters from The Walt Disney Company and Pixar Animation Studios. Disney Infinity allows players to experience both original adventures in some of their favorite Disney and Pixar worlds and to build their own worlds using the power of their imagination. The creative freedom is unprecedented!

With Disney Infinity, the whole family can bring their favorite Disney characters to life and explore their worlds, and then keep on building. And with this starter pack, you’ll have everything you need to dive in. 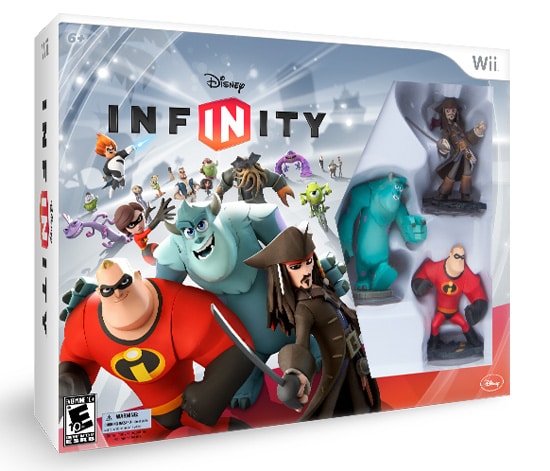 Place figurines like swashbuckling pirate Jack Sparrow or noble superhero Mr. Incredible on the Infinity base and watch as they’re transported into the video game! Playsets let you incorporate entire worlds – like Monsters University‘s campus – into the game. Play through each location’s unique challenges and then put all your characters together and make your own story in Toy Box mode. Your only limit is your imagination!

Wonder what it’s rated? That’s easy, E10+. If you are wondering if it will be compatible with your game platform, here are the ones that support it: PlayStation®3 system, Xbox 360® console, Wii™ console, Wii U™ console and Nintendo 3DS™ system. The price, only $74.99.

So if you wondering when and where you can get it, I have that answer too. The official launch date of Disney Infinity is August 18. However, for those of you lucky enough to be visiting the Walt Disney World Resort, you can actually pick it up a couple days prior on Aug. 16. Here are the details:

Make plans to stop by and pick up your Disney Infinity Starter Pack on Aug. 16 at Once Upon a Toy in the Downtown Disney Marketplace. Creators of the game will actually be on hand at a special Gaming Booth from 4–9 p.m. So jump in and become part of the action.

Special Gift with Purchase Offer:
On Aug. 16, receive ONE (1) complimentary Disney Interactive Game Piece with the purchase of a Disney Infinity Starter Pack ($74.99, plus tax) for the PlayStation®3 system, Xbox 360® console, Wii™ console, Wii U™ console or Nintendo 3DS™ system at Once Upon a Toy in Downtown Disney Marketplace at the Walt Disney World Resort. For details, limits and restrictions, please visit www.DisneyParksMerchandise.com.

Get ready to play as some of your favorite Disney and Pixar characters!

For more information be sure to check out Disney.com/Infinity or #DisneyInfinity
Nintendo trademarks and copyrights are properties of Nintendo. “PlayStation”, the “PS” Family logo and “PS3” are registered trademarks and the PlayStation Network logo is a trademark of Sony Computer Entertainment Inc.