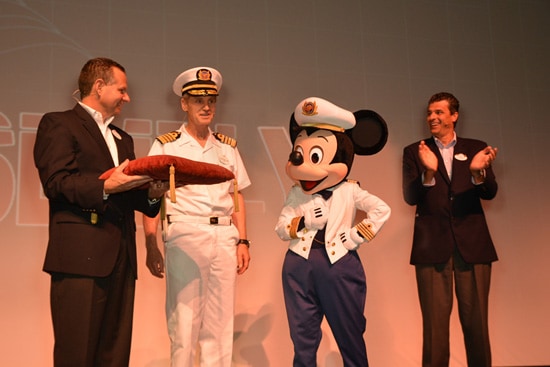 Captain Tom Forberg has been with Disney Cruise Line since the very beginning. He is the first and longest-serving captain, oversaw the construction of all four Disney ships and served as the inaugural captain on each ship. So it is only fitting that he is named the first Commodore in the history of the company.

Yesterday, the officers and crew aboard the Disney Fantasy joined President Karl Holz (not pictured), Senior Vice President Anthony Connelly, Captain Mickey and Vice President Bert Swets in surprising Captain Tom with the honor and presenting him with his new hat.

Commodore is an honorary appointment bestowed upon accomplished and distinguished leaders of military, commercial and cruise fleets. With this honor, Commodore Tom will serve as the highest-ranking Disney captain and will continue to share the duty of commanding the ships rotationally along with the other captains. In the cruise industry, only one other cruise line is actively using the Commodore title.