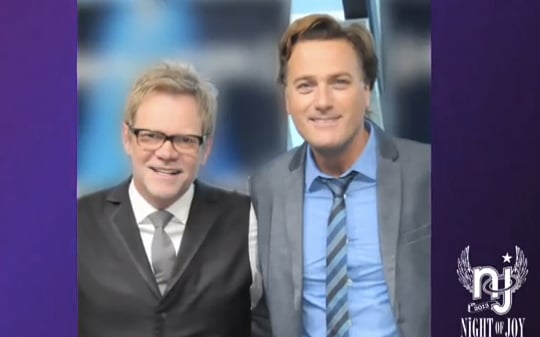 Well, it’s shaping up to be another stellar year for Disney’s Night of Joy.

After more than 60 combined years in the industry and more than 25 million records sold worldwide, the two are still going strong.

Steven’s new record – his first all-new studio record in seven years – “The Glorious Unfolding,” releases on September 30, 2013. And Michael has just written a new inspirational book called “The Power of an Ordinary Prayer.” Both also continue to provide rigorous support for charitable efforts including: Steven’s foundation, ShowHOPE, established to care for orphans by engaging the church and helping Christian families reduce the financial barriers to adoption; and Michael’s support for The Samaritan’s Purse, famous for their international holiday “shoebox” charity called Operation Christmas Child. Michael also is one of the founders of Rocketown, a nonprofit outreach for teens, providing opportunities in arts, music, action sports and mentoring programs.

Very familiar to guests of Disney’s Night of Joy, 2013 will mark the pair’s 20th combined performance. I can think of countless memories watching both performers as a guest of Nights of Joy past. The two titans of Christian music will be playing one integrated set at this year’s event – with the guys performing both together and separately.

We caught up with Steven and Michael on the red carpet at the K-LOVE Fan Awards at the historic Ryman Auditorium in Nashville. While they were keeping exact details close to the vest, they gave us a hint as to what fans can expect from their time at this year’s event.

2013 marks the 31st year for Disney’s Night of Joy, two nights where the best in Contemporary Christian music meets the fun and fantasy of Magic Kingdom Park. In addition to their favorite Christian artists, guests can enjoy beloved Magic Kingdom Park attractions like Space Mountain, Splash Mountain and Big Thunder Mountain – along with New Fantasyland, the largest expansion in Magic Kingdom Park history.