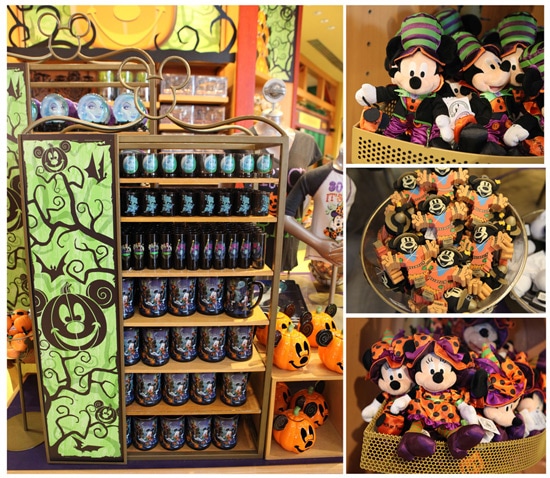 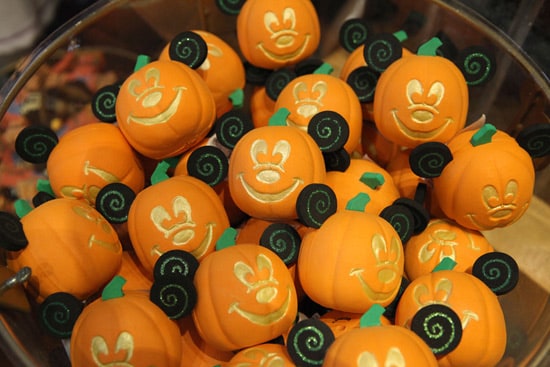 The frightfully friendly ghosts from The Haunted Mansion have returned to merchandise at Disney Parks. You may recall that last year we introduced a new art program featuring Disney characters outside The Haunted Mansion (you can read my interview with Disney artist Cody Reynolds in this article). The artwork proved so popular for merchandise that it was reintroduced for Halloween this year. I recently visited the World of Disney at Downtown Disney Marketplace in Florida to get a first look at returning favorites along with some new items.

In recent years, the Halloween assortment has grown to include a variety of items including home and decorative goods, plush, Vinylmation, pins, souvenirs, softlines and much more. One thing I immediately noticed was a new pumpkin antenna topper, which was placed near toppers that featured a scarecrow and a ghost Mickey Mouse. The souvenirs team said to look for a Hitchhiking Ghost topping coming in October. Another new item that caught my eye was the singing busts ornament set. This set was design by Costa Alavezos from Disney Design Group, and features five stylized busts inspired by the graveyard scene in The Haunted Mansion. This set seems like a nice complement to the other Haunted Mansion home items that were introduced last February. While many of the Halloween items are now available at Walt Disney World and Disneyland Resorts, there are a few items coming soon. In particular, the Vinylmation team is releasing two new 3-inch figures designed by Disney Design Group artist Caley Hicks on September 20. If you are headed to Mickey’s Not-So-Scary Halloween Parties at Magic Kingdom Park starting September 10, be sure to look for new pins created especially for this annual event.

Here are a few more images from my visit. You can find many of these items and more on our Disney Parks online store.