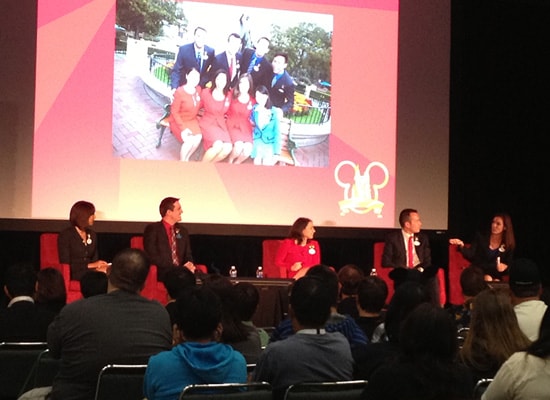 This afternoon, Disney Parks Ambassadors from around the world spoke at the D23 Expo 2013, produced by D23: The Official Disney Fan Club, at the Anaheim Convention Center. Before they took the stage, we had the chance to ask a few questions of current Disney Parks Ambassadors Sachiko White, Megan Navarette, Antonella Giallombardo, Jonathan Rabeute, and Tye Arnold about the history of the program and their own experiences as Ambassadors.

What inspired you to become a Disney Ambassador?

Tye: After becoming a leader in the company and seeing the impact I could have in my local area, I thought being a Walt Disney World Ambassador would give me an even greater platform to recognize our cast members and to share the amazing stories from our guest experiences.

Sachiko: I saw it as an opportunity to serve, learn more about, and sing the praises of a company that has been extremely good to me, while learning new skills and applying existing ones in new and interesting ways.

What has been your favorite project so far in your term?

Jonathan: I’ll always cherish the magical moment that was to meet and interview Disney Legend Alan Menken when he came to Paris … he played and sang “Be Our Guest” for the two of us. Truly magical!

Megan: It’s really difficult to pick a favorite as each event is special for its own reasons, but the events that have stood out include hospital visits with Mickey Mouse, the Walt Disney Legacy Awards reception and building a playground with KaBOOM. I am incredibly grateful for the opportunities this role presents, and constantly pinch myself as if I am dreaming.

Antonella: We’ve had the opportunity to spend shadowing days with our fellow cast members (I love these moments because we can meet people, know more about their passion and talent and of course their jobs!), to give classes about Walt Disney’s life and career, to perpetuate Disney values to our local communities along with the Disney VoluntEARS, and to interview people such as Dr. Jane Goodall.

With the 50th anniversary of the program approaching, what is the most interesting piece of Disney Ambassador history you’ve learned?

Tye: Having spent time with Debby Dane-Brown, our first Walt Disney World Ambassador, I’ve heard great stories about the expectations of her role back in 1971. She shared with our team about the time she had an appearance on the TV show “To Tell the Truth.” The show had a panel of celebrity judges that had to distinguish which person out of a group of three was telling the truth about the real Debby Dane (Brown). Debby walked out and said “Hello, I’m Debby Dane (Brown) and I am the 1971 Walt Disney World Ambassador.” Then a second young lady came out and said the same thing, and then a third. She shared fun memories of this appearance as it was a way that the country learned more about this new “Disneyland of the East.”

Megan: I love the story of the beginnings of the Ambassador program. There were so many exciting and significant things happening at the company with the release of “Mary Poppins,” the tenth anniversary of Disneyland and the New York World’s Fair – it would have been fun to be a part of it all.

What does it mean to you to be part of the legacy of the Disney Ambassador program?

Jonathan: It is a great honor being part of a legacy that Walt Disney initiated himself. It’s a dream come true that we are living every day of this experience.

Antonella: I feel extremely honored and lucky to be a Disney Ambassador. I grew up watching Disney cartoons on television. When I started working at Disneyland park 7 years ago, I was proud to be a cast member and to share the Disney values with our guests. Today, when I see our guests’ reactions when they ride an attraction or watch our nighttime show, “Disney Dreams!,” with tears in their eyes, I can’t stop thinking that all this started with a man and his dream of amusement park. Thanks to all the cast members, Walt Disney’s legacy is perpetuated all around the world.