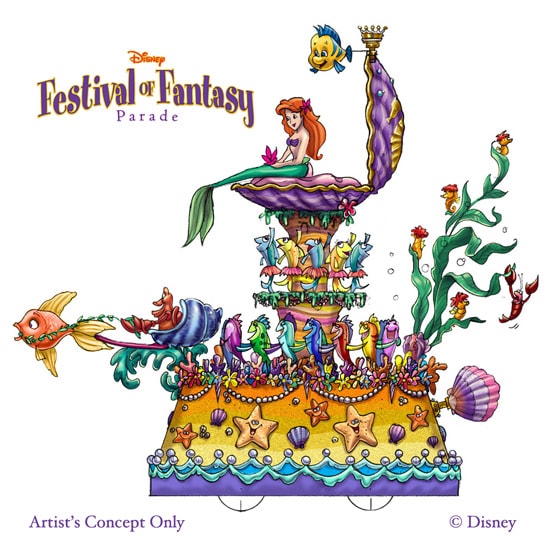 Today we have an exciting sneak peek at “Disney Festival of Fantasy Parade,” the new daytime parade that’s set to debut at Magic Kingdom Park in spring 2014.

As we previously announced, this procession will specifically highlight the stories of “Sleeping Beauty,” “Dumbo,” “Pinocchio,” “Peter Pan,” and “Tangled” among others. Today, we’re happy to share two new renderings of floats that will appear in “Disney Festival of Fantasy Parade” that are inspired by “The Little Mermaid” and the Disney●Pixar film “Brave.”

Here, Ariel and her friends grace a larger-than-life music box that will showcase a colorful musical party “Under the Sea.” 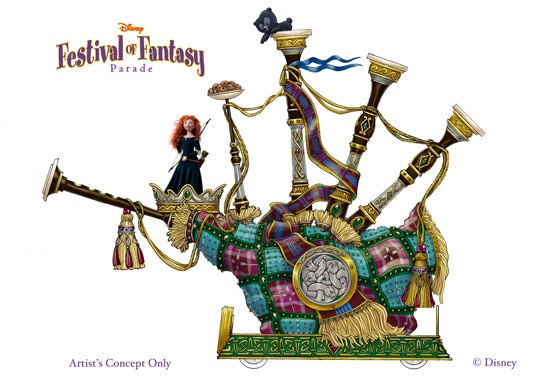 And in this rendering, a troupe of Scottish dancers and an enormous bagpipe travel down Main Street, U.S.A., to announce the arrival of Merida, who is accompanied by her triplet brothers in their bear forms.

Other floats on tap for the parade will celebrate Disney Princesses in a Royal Court Garden float. Rapunzel and Flynn Rider will appear on a longship off on a search for another “Best. Day. Ever.” And Peter Pan and Wendy will soar high above on a pirate galleon ship, joined by Captain Hook, Mr. Smee and Tinker Bell.

To make room for “Disney Festival of Fantasy Parade,” the park’s current daytime parade, “Celebrate a Dream Come True,” will end it’s daily run on December 20, 2013, with finale performances scheduled for January 1-4, 2014. During the holiday season, “Mickey’s Once Upon a Christmastime” Parade will be presented each day, and guests will still be able to enjoy performances of “Move It, Shake It, Celebrate It” and “Main Street Electrical Parade” at the park throughout the changeover, leading up to the spring debut of “Disney Festival of Fantasy Parade.”

Which parade float are you most excited to see in the new parade? Tell us in the “Comments” section below.