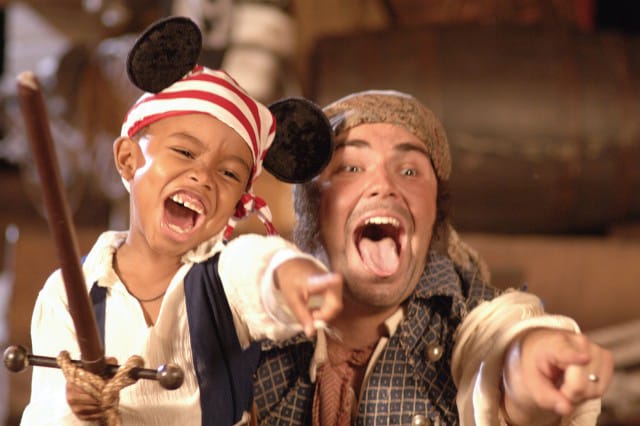 Avast me hearties! Pirates are heading to the Walt Disney World Resort and Disneyland Resort for a week of “Limited Time Magic” surprises inspired by “Talk Like a Pirate Day.”

At Walt Disney World, The Rusty Cutlass pirate band will entertain you in Caribbean Plaza at Magic Kingdom Park with tales and tunes, while Captain Hook, Pirate Goofy and Jake from “Jake and the Never Land Pirates” make appearances in the park. There will be a special pirate pre-parade ahead of daily performances of the “Celebrate a Dream Come True” Parade and if you sign on with the Pirate’s League earlier in the day, you may find yourself recruited to join Jake, Captain Hook, Mr. Smee and their crew for a procession along Main Street, U.S.A.

Also for Pirate week, The Pirates League at Magic Kingdom Park will have a mini-makeovers available for adults, called Skulls and Skurry. And from September 23 to September 29, while supplies last, you will receive complimentary pirate teeth to complete your look, if you take part in a transformation at The Pirates League (kids and adults). You can make reservations now by calling 407-939-2739.

At Disneyland park, the Bootstrappers pirate band will entertain you in New Orleans Square with tall tales and musical skills, while a scurvy bunch of Bilge Rats take over the Sailing Ship Columbia looking to train new recruits. Over at Pirate’s Lair on Tom Sawyer Island, you may encounter a bright-eyed scallywag with a comical parrot sidekick or even make the acquaintance of Captain Jack Sparrow himself!

Join us for Pirate Week at the Walt Disney World Resort and Disneyland Resort from September 23-29.