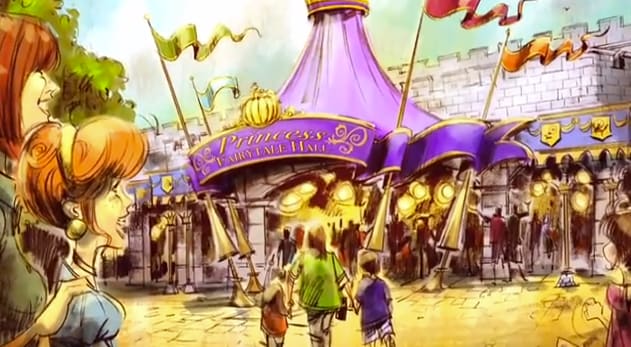 As we shared a few weeks ago, our Walt Disney Imagineers are busy putting the finishing touches on Princess Fairytale Hall in Magic Kingdom Park. This exquisitely detailed Disney Princess character greeting location is the next to debut as a part of the New Fantasyland expansion – and we’re happy to share today that the Hall will officially open its doors on September 18.

Our friends at Walt Disney Imagineering just shared a new sneak peek video with us in honor of today’s announcement. In it, Imagineers Pam Rawlins and Jason Grandt explain just how detailed this new character greeting area will be. In addition to a castle-like entrance, high ceilings and elegant wood-paneled rooms, the space will feature beautiful princess portraits, themed wallpaper, glittering stained glass windows and accessories that have been inspired by props seen in films like “Cinderella” and “Tangled.”

As a reminder, Princess Fairytale Hall will offer two separate character greeting experiences, which means there are two queues to choose from. You can choose to meet either Cinderella or Rapunzel, each of whom will be joined by one fellow Disney princess.

Join the conversation online with the hash tag #NewFantasyland on Twitter.

Take a look at the Disney Parks Blog posts below for more on Princess Fairytale Hall: