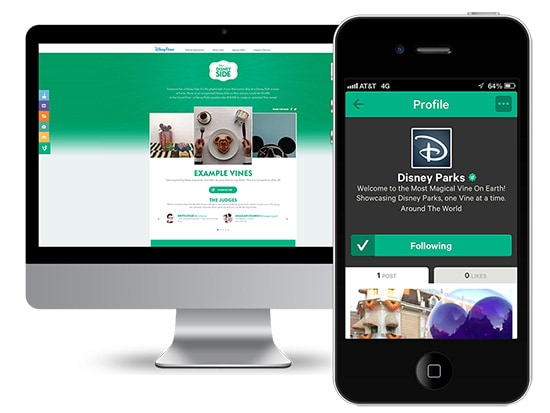 Today, we’re happy to announce the debut of a new Disney Parks Vine account that will showcase the fun spirit of Disney vacations through one of social media’s fastest-growing video-sharing apps.

Disney Parks is also celebrating the account’s launch with a “Vine Your Disney Side” contest. Starting today, October 1, Viners who tag their videos with #DisneySideContest automatically enter their six-second clips for a chance to be re-Vined on the Disney Parks Vine account. Selected videos will begin appearing on the channel October 7, with each featured filmmaker receiving $1,000. Featured Viners will also receive the chance to win a vacation to Disneyland Resort or the Walt Disney World Resort and an opportunity to secure a $10,000 commission to create a series of Disney Side videos.

For more information on the “Vine Your Disney Side” contest and to see the entire list of rules and regulations, visit DisneySideContest.com.

UPDATE: Our grand-prize winner has been selected and is Elke Whitehead of Vancouver, Canada. Check out her winning #DisneySide Vine below.