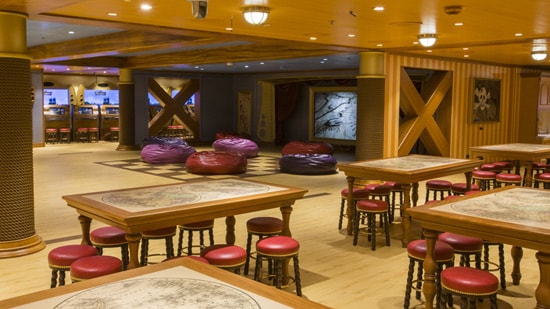 Adorned with giant, nautical ropes belayed around columns, ancient navigation maps on the walls and compasses emblazoned throughout the décor, Oceaneer Lab takes pint-sized pirates on a journey of discovery, exploration and adventure.

This seafaring fun spot has video walls and digital stations for games, an animator’s studio for budding artists and a pirate workshop for experiments and art projects. Plus, Navigator Simulators let young buccaneers take the wheel and captain a ship through the mysterious waters of the Caribbean.

Just down the hall for the youngest cruisers — ages three months to three years — is the new It’s a Small World Nursery. Inspired by the style of Disney Legend Mary Blair, this whimsical world has cheerful artwork and murals resembling the namesake Disney Parks attraction.

The space is filled with hands-on features, including horns to honk, wheels to spin and buttons to press, along with colorful, kid-sized tables and chairs for toddlers to enjoy crafts, books and games with caring, trained counselors.

At the back of the nursery, a serene motif and a calm, quiet atmosphere is reserved for naptime. Parents wishing to check on their children without disturbing them can glimpse into the nursery’s main play area through a one-way window.

Now that I’ve given you a virtual tour of the kids spaces, which re-imagined areas on the Disney Magic do you want to see more of next?

For more about the Disney Magic, click the links below: