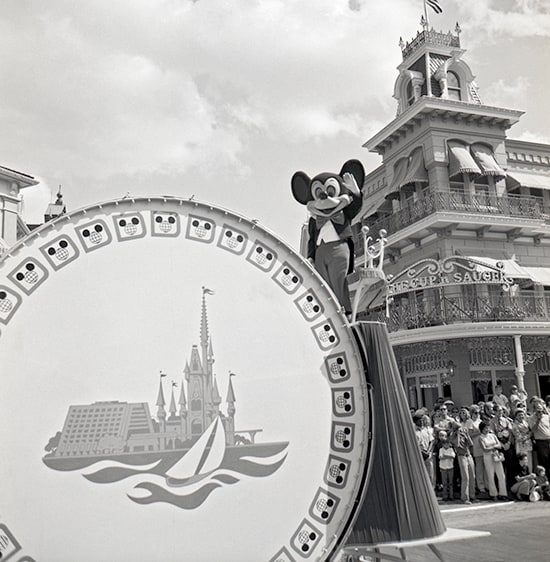 The opening of Magic Kingdom Park in 1971 was a joyous occasion – with a three-day grand opening ceremony to match! One of the highlights was the park’s official Grand Opening Parade, which stepped off with style at 2 p.m. on October 25.

First up, a small marching band dressed in red and white uniforms played “The Mickey Mouse Club March,” while Mickey Mouse kept the beat on an over-size drum. A large cast of Disney characters followed, including: Dumbo (“Dumbo”); Queen of Hearts and White Rabbit (“Alice In Wonderland”); Thumper and Flower (“Bambi”); Gepetto and Honest John (“Pinocchio”); Snow White, the Seven Dwarfs and the Queen (“Snow White and the Seven Dwarfs”); the Aristocats (“Aristocats”); and Winnie the Pooh, Heffalumps and friends (“Winnie the Pooh” featurettes). A fleet of marching toy soldiers followed, trailed by waltzing alligators and hippos from “Fantasia.”

A highlight of the parade took place when the Herald Trumpeters of the United States Army Band lined the top of the buildings on Main Street, U.S.A., to signal the arrival of a 1,076-member marching band. This line of marching musicians, directed by “The Music Man” composer Meredith Willson, stretched from the park’s main entrance all the way to Cinderella Castle and played “76 Trombones.” A mass choir then appeared on the castle stage to join the band in “When You Wish Upon A Star.”

During the last verse, larger-than-life drums that lined the parade route were opened to release 50,000 multicolored balloons. Simply amazing!

Would you believe that some of the cast members who originally designed this parade still work for Walt Disney World Resort more than 40 years later? Check out the video below to see what one had to say about this must-see moment in Magic Kingdom Park history.