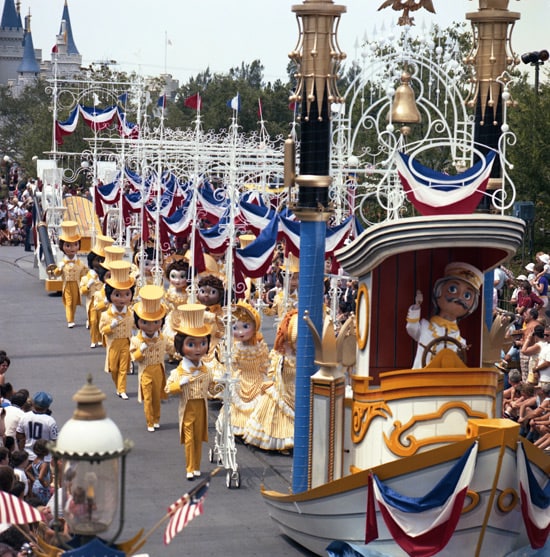 This week, we’re taking a look back at “America On Parade,” a procession that brought American history to life on Main Street, U.S.A., at Magic Kingdom Park in honor of the United States Bicentennial celebration.

The parade ran from June 6, 1975, to September 6, 1976, and was the park’s largest daily procession yet, featuring more than 150 performers and 50 floats, which showcased some of the nation’s major historical milestones, like the invention of the car, the first airplane flight and the moon landing.

Mickey, Donald and Goofy led the parade atop a Spirit of ‘76 float. A series of 8-foot-tall People of America characters, each representing historical figures such as Christopher Columbus, Betsy Ross and Benjamin Franklin, followed along on floats that recreated their milestone moment in American history. The finale of the parade was punctuated by a Celebration of Independence float that featured Lady Liberty and Uncle Sam.

One particularly unique aspect of the parade was its soundtrack, which blended the sound of an antique band organ with a modern synthesizer. The music featured new arrangements for “Oh Susanna” and “Turkey in the Straw” which were recorded from a 300-pipe, 19th century military trumpet organ called the Sadie Mae of St. Louis at the Grand Ole Opry in Nashville. Additionally the legendary composing duo, the Sherman Brothers, were hired to write an original song for the parade called “The Glorious Fourth.”

For more from the “Step in Time” series, click the links below: