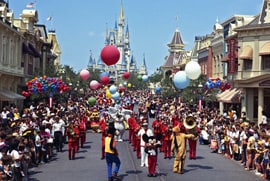 Step in Time: ‘Cavalcade of Characters’ Kicks Off at Magic Kingdom Park in 1974 Mickey kicked off the “Cavalcade” traveling on foot down Main Street, U.S.A., followed by Alice, Tweedle Dee and Tweedle Dum, and Walrus from “Alice In Wonderland.” Donald Duck rode in on Main Street’s antique fire engine, while Goofy and Pluto followed along, balloons in hand. The Dwarfs from “Snow White and the Seven Dwarfs” followed in a line, with Snow White appearing on a small wishing well-themed float. A Casey Jr. train chugged in next with King Richard the lion (“Robin Hood”) playing a pipe organ and Minnie waving from the caboose. Other friends from the 1973-release “Robin Hood” – Prince John, Sheriff of Nottingham and Friar Tuck – followed behind. Captain Hook rode in on a mini pirate ship, which resembled the attraction vehicle at Peter Pan’s Flight. Winnie the Pooh and his friends came next, followed (no doubt to Pooh’s delight) by a giant “Hunny Pot” float.

One especially striking appearance for us Disney history fans was Little Toot, the tugboat character from the 1940 short “Little Toot”, who appeared in the form of a mini float.

The “Cavalcade of Characters” parade ended in 1975 to make way for “America On Parade” which would celebrate the United States bicentennial. “Cavalcade of Characters” returned in 1977-1978, with a few enhancements, including two additional floats for Snow White and the Seven Dwarfs, an appearance by Herbie the Love Bug, and the addition of Elliott from the newly released “Pete’s Dragon” film. A “Mickey Mouse Club” section was also added, featuring two oversized red drums, dancers with flags, and Mickey Mouse waving from atop a float.

For more from the “Step in Time” series, check out the posts below:

Likes (1)
Share Step in Time: ‘Cavalcade of Characters’ Kicks Off at Magic Kingdom Park in 1974