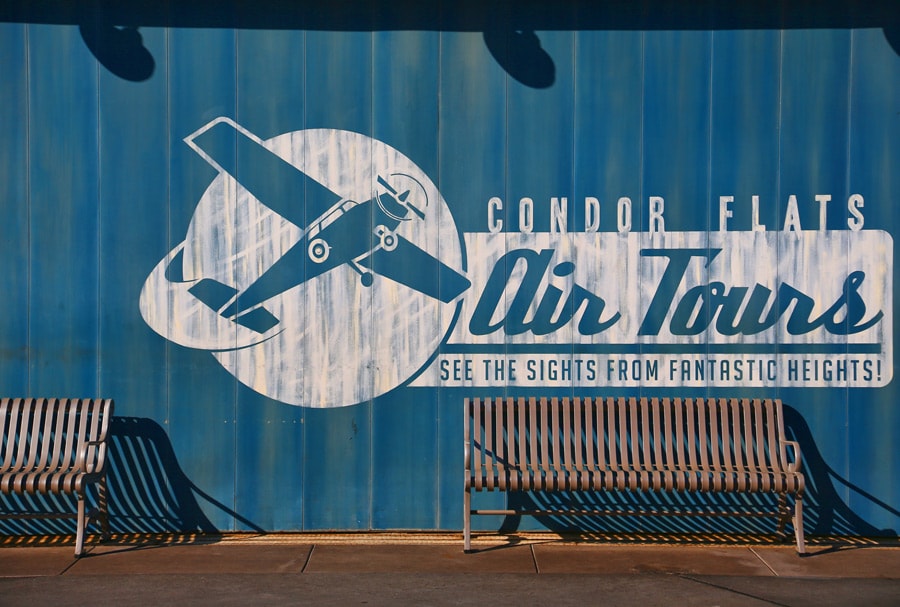 One of my favorite things about “The Magic of Disney Parks Storytelling” series is learning something new about some of my favorite Disneyland Resort attractions and lands. Soarin’ Over California is at the top of my must-do list, and I’ve always been intrigued by the tributes to aviation placed throughout the area. So, please make sure your tray-table is locked and your seat is in the upright position … we are clear for take-off on this journey into the story of Condor Flats!

According to legend, Condor Flats was once a destination for pilots and aeronautical innovators. Airmen traveled from across the country to Southern California for the wide-open spaces and good thermal winds found in this arid high desert. From the beginnings of the Age of Aviation and into the Space Age, Condor Flats was the stage for the Golden State’s aerospace industry . The fading exteriors of the hangars in the area stand as a testament to this exciting and innovative period in aviation. 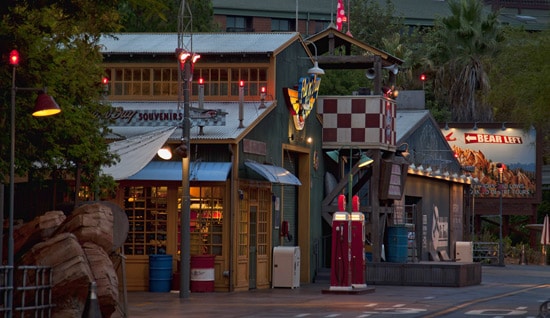 The original hangar in Condor Flats was a key workshop for early California aviators and designers. Then from the mid-1940s to the late 1960s, Condor Flats became the hub of rocket research and jet testing. “Higher, Faster, Further” was the motto of this time period, and technology was skyrocketing, quite literally. The engineers and aviators needed to move to more sophisticated headquarters in order to further their rocket and radar research, but they kept the old hangar as a symbol of their high-flying dreams while a new hangar was built just a little further down the runway. 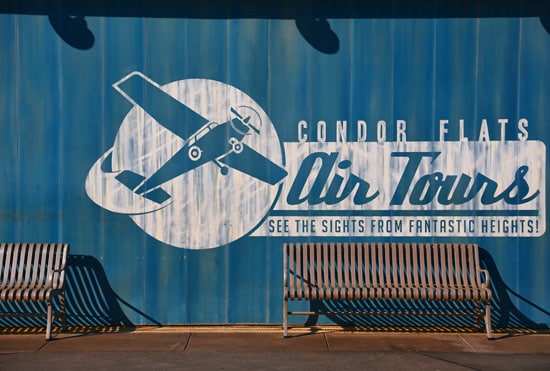 Today, one of the retired test pilots has returned to this iconic flying destination to set up Condor Flats Scenic Air Tours in the original hangar; you can find their logo standing out among the other faded images left from previous years. Walking through Condor Flats today, you’ll notice the original hangar is now the Fly ‘n’ Buy, a souvenir shop, while the rocket test center is Taste Pilots’ Grill.

Next time you are in Condor Flats, look for the Condor Flats Scenic Air Tours logo, or take a look inside Fly ‘n’ Buy or Taste Pilots’ Grill for these special nods to the Age of Aviation!

Read on for more posts about “The Magic of Disney Parks Storytelling”: