Are you looking forward to the release of Disney’s “Frozen”? If so, you just may add a last-minute trip to Disneyland Paris on your list for Santa Claus after reading this post, because this year the resort is focusing their holiday celebration around the new characters from the film. 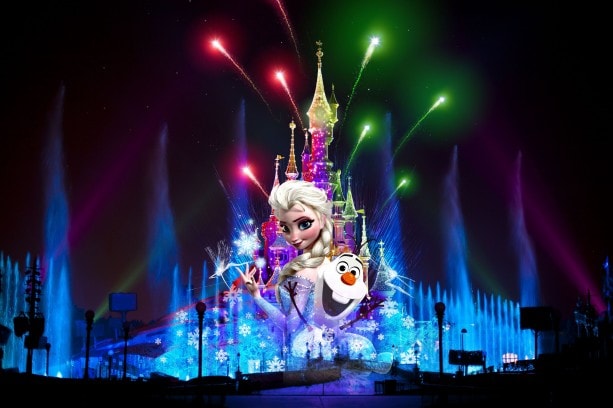 The holiday celebration, which runs through January 6, 2014, will feature “Frozen” heroines Elsa and Anna in the park’s “Disney Magic on Parade!” holiday procession. The film’s Olaf the snowman will also serve as the master of ceremonies for the park’s new nighttime “Disney Dreams! of Christmas” show, a new spectacular created for the holiday season. As a part of his role, Olaf will conduct the show’s orchestra, as well as its projections, fountains, special effects and fireworks. Other Disney characters will come to life in the form of projections on the castle, including the cast of “Toy Story,” which will perform their own take of “The Nutcracker” ballet.

Throughout the celebration, guests can also have their photos taken with Santa Claus, who will have his very own village at Disneyland Paris and will appear in a special musical parade called “Christmas Cavalcade.”

Also new for this year is the park’s new Christmas tree, which measures 78 feet tall and will be adorned with nearly a thousand decorations from around the world. The tree will be lit each night during a special ceremony called “Magical Christmas Wishes,” which is led by Pinocchio and his pal, Jiminy Cricket.