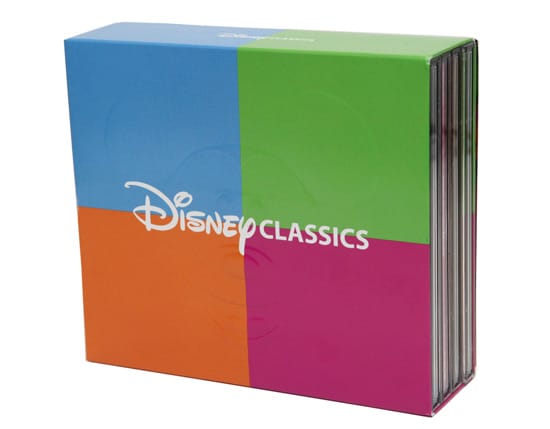 You may recall from previous Disney Parks Blog articles that I’m a big fan of Disney music. I recently shared details about two new official music albums from Disney Parks that were released in August 2013. This time, I have details about a new four disc boxed set that contains classic Disney musical moments spanning the nearly entire 90 year history of The Walt Disney Company. This set was recently introduced in select locations at Disneyland and Walt Disney World Resorts a few weeks earlier than the worldwide release on November 11, 2013. 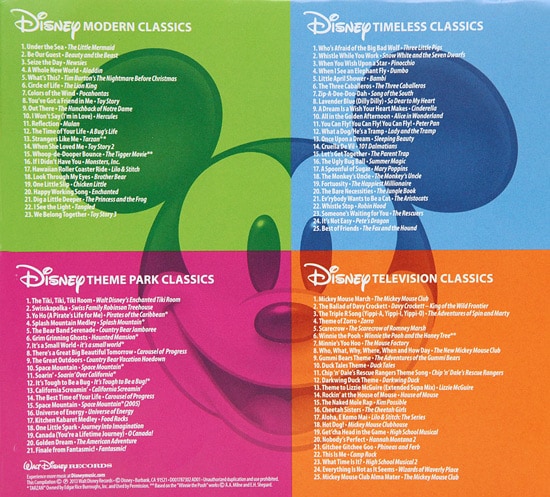 Long-time Disney music producer Randy Thornton divided the set into four themes – Disney Modern Classics, Disney Timeless Classics, Disney Theme Park Classics and Disney Television Classics. Randy selected some of the most iconic Disney music to fit each theme including “Who’s Afraid of the Big Bad Wolf,” “Mickey Mouse March,” “Be Our Guest,” “There’s a Great Big Beautiful Tomorrow” and much more. In total, there are 94 different tracks included in the set. In addition to compact discs, the set will also be offered as a digital download on sites like the Disney Music Store or iTunes.

After looking at the track listing, I began thinking about my favorite Disney song. I’ve shared in previous articles how I adore any music created for Epcot, yet I had to think for a moment about my all-time favorite Disney tune. 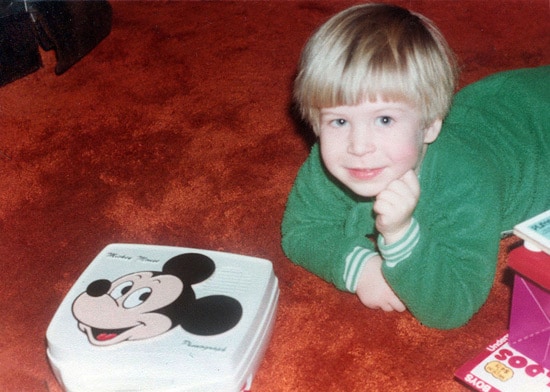 When I was younger, I enjoyed listening to Disney Read-A-Long storybooks on a portable Mickey Mouse record player (“You’ll know it’s time to turn the page when you hear the chimes ring like this”). I loved the story of “The Aristocats,” as it contained what I now identify as my favorite song, “Everybody Wants to be a Cat” (France, cats, jazz – all the things I dig today!). I was happy to see it was included in the new set.

Now it’s your turn. What is your favorite Disney song? Please share in the comments below.