As I showed you in my last post about the revamped Animator’s Palate on the Disney Magic, Disney has a special way of making even mealtimes memorable for families. Today, I want to tell you about two brand-new restaurants on our transformed ship, which both take cruisers on a culinary journey around the globe!

Let’s start with Carioca’s, one of my favorite new places to dine with its Latin America ties. Themed to the vibrancy of Rio de Janeiro, the energetic atmosphere in Carioca’s makes dining here fun, day or night. During the day, buffet meals feature a festival theme. At night, the atmosphere transforms into a more elegant dining locale with softly illuminated lanterns and a scenery scrim to conceal the buffet and kitchen areas. The restaurant is named after Donald Duck’s parrot pal from Brazil in “The Three Caballeros,” Jose Carioca, providing inspiration for Latin-themed fare with dishes like slow roasted pork belly, fried plantain and malanga pancakes and grilled rum-marinated swordfish. 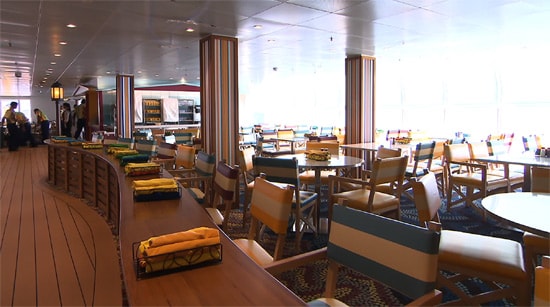 For a more casual meal, Disney Magic cruisers can head to the Land Down Under (although this festive Australian-influenced restaurant is located up on deck nine). Cabanas offers food and beverage stations during daytime hours, with indoor and outdoor dining, and table-service at dinner. The Australian setting of the Disney•Pixar animated classic “Finding Nemo” inspires the décor, complete with uniquely Disney touches. You can find hints of the film’s fishy and feathered friends throughout the restaurant with a beach-themed dining room, colorful surfboards, beach umbrellas and teak Adirondack chairs.

Now that I’ve shown you the Disney Magic’s new spaces for kids, water fun and family meals, what do you want to see next?

Keep an eye on the Disney Parks Blog and Disney Cruise Line Facebook page, and follow @DisneyCruise on Twitter for all of the exciting updates about the Disney Magic’s transformation! While you’re on Twitter, join in the conversation by using the hashtag #DisneyMagic