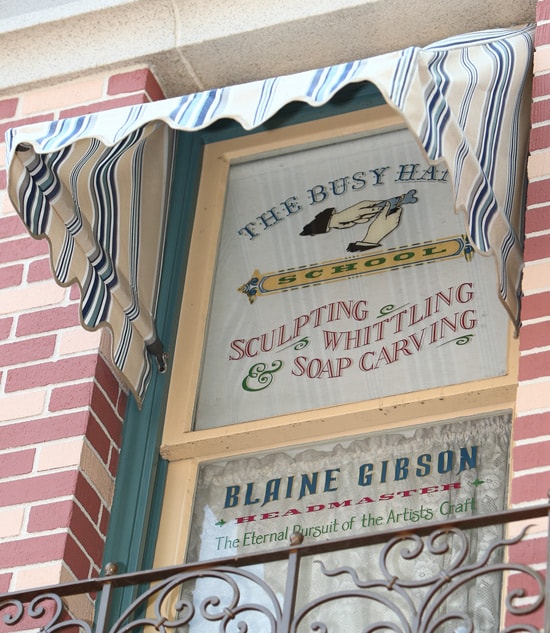 Twenty years ago, on November 18, 1993, the “Partners” statue was dedicated at Disneyland park. Blaine Gibson, Disney Legend, sculptor and animator, is the creator of this bronze statue of Walt Disney and Mickey Mouse standing hand-in-hand in the Central Hub at Disney Parks around the world. Blaine made the figure of Walt “larger than life” – roughly 6 feet, 5 inches tall. In reality, Walt was about 5 feet, 10 inches tall.

Born February 11, 1918, in Rocky Ford, Colorado, Blaine attended Colorado University but left school to join The Walt Disney Studios in 1939. While working as an inbetween artist and assistant animator, he took evening classes in sculpture at Pasadena City College. Among his animation credits are “Fantasia,” “Bambi,” “Alice in Wonderland,” “Sleeping Beauty,” and “101 Dalmatians,” just to name a few.

After animating all day, Blaine would go home at night and sculpt; it had been a favorite hobby of his since childhood. In 1954, Walt Disney happened to see one of Blaine’s art exhibits and recruited him to work on special projects for his new theme park, Disneyland.

Blaine was somewhat ambivalent about being diverted from his goal of establishing himself as one of the Studio’s foremost animators. As he recalled in 1995, “I didn’t think it was that important, but then I was told Walt was expecting me to work on these projects. So I said to myself, ‘what the heck’ and went (to Walt Disney Imagineering). I was never sorry after that.”

At first, Blaine divided his time between sculpting and animating, but in 1961, he transferred full-time to the design and development division to supervise the newly created sculpture department. Ultimately, Blaine went on to make a name for himself in 3D animation, creating hundreds of sculptures from which Audio-Animatronics figures and bronzes were produced for exhibits at the 1964-65 New York World’s Fair and Disney theme parks around the world.

Blaine is responsible for the realistic look of President Lincoln in Great Moments with Mr. Lincoln. In fact, he is featured in the pre-show video with Walt Disney discussing how he used a life mask to sculpt the iconic 16th president. Among Blaine’s other credits are his contributions to Pirates of the Caribbean, the Haunted Mansion, and Walt Disney’s Enchanted Tiki Room. He also directed the sculpture of every U.S. president, up to George W. Bush in 2001, for The Hall of Presidents at Walt Disney World Resort.

After nearly 45 years with The Walt Disney Company, Blaine retired in 1983. He continued to consult on such projects as The Great Movie Ride in Disney’s Hollywood Studios at Walt Disney World Resort.

Blaine’s window, located above The Mad Hatter, was dedicated in 1992 and reads: The Busy Hands School, Sculpting, Whittling & Soap Carving, Blaine Gibson, Headmaster, “The Eternal Pursuit of the Artists Craft.” Blaine was named a Disney Legend in 1993.