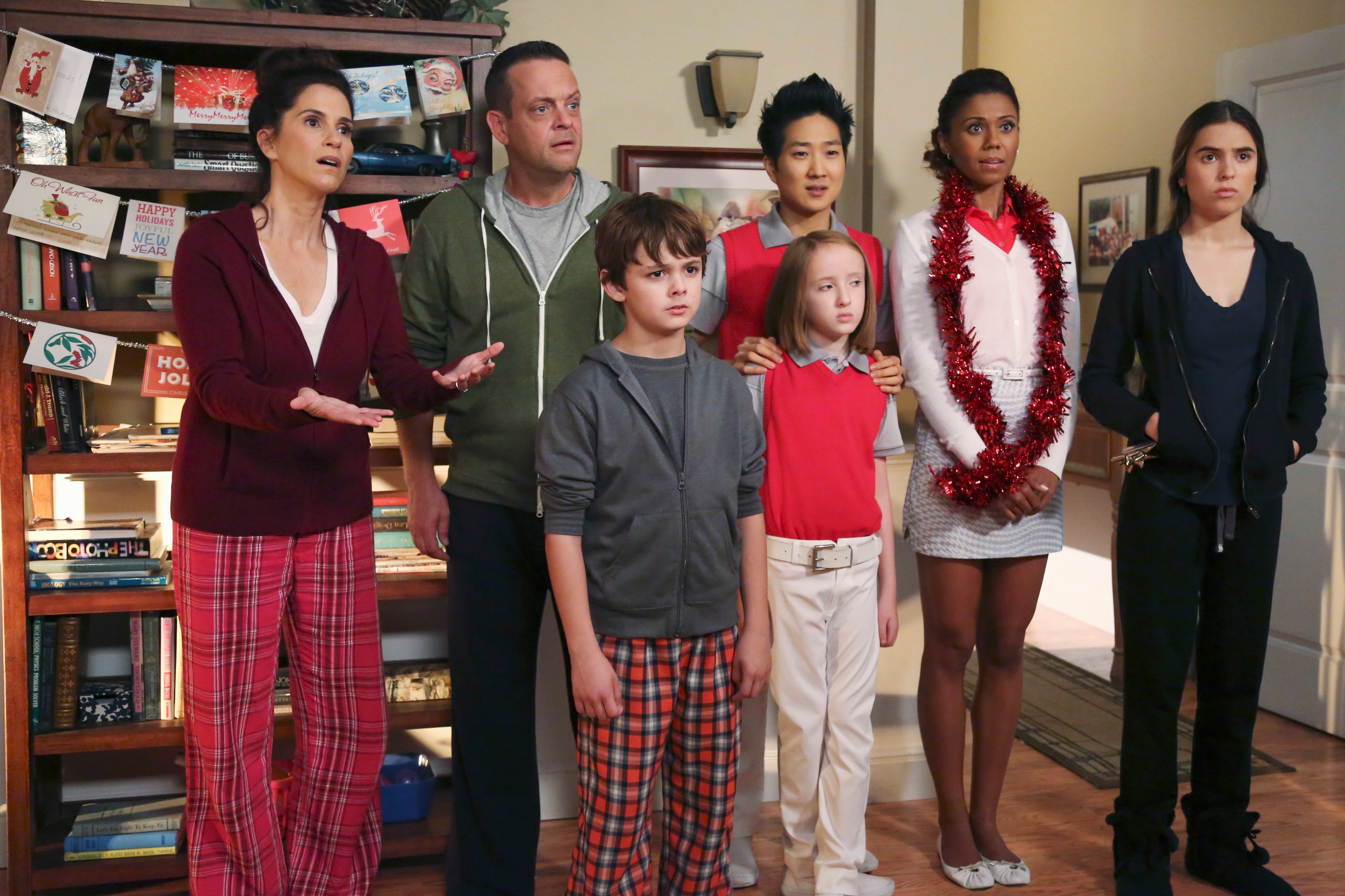 What if, instead of riding into the galaxy on Space Mountain, Star Tours or Mission: SPACE, you had next-door neighbors who came from beyond the stars? That’s the idea behind one of today’s most talked-about TV comedies, “The Neighbors,” airing Friday nights at 8:30 p.m. ET / 7:30 p.m. CT on the ABC TV Network.

Last season, the Weaver family moved into a nice little New Jersey subdivision and all the other residents turned out to be from the planet Zabvron. Now in the second season, they’ve become best friends with Zabvronian expatriates Larry Bird, Jackie Joyner-Kersee, Reggie Jackson and Dick Butkus (they’ve taken on the names of the Earth’s finest physical specimens).

Of course, in real life, the stars of “The Neighbors” (and their families) travel into the galaxy by visiting either Disneyland park or Walt Disney World Resort. We chatted with the two TV dads: Lenny “Marty Weaver” Venito and Simon “Larry Bird” Templeman just before they were off to a script reading for the next episode. Greg Ehrbar: Simon, you really are an alien, right?

Simon Templeman: (laughs) Yes, at least to you Americans! I grew up in the UK in Sussex and came out during a show here in Los Angles and in New York. I met my wife (award-winning actress and Anaheim native Rosalind Chao) when she was an international tour guide at Disneyland. She got to wear the short tartan skirt. I wish I had seen her in that plaid skirt.

Greg: I would just love it if “The Neighbors” went to Walt Disney World or Disneyland. Maybe your TV wife, Jackie [played by Toks Olangundoye], could wear one of those tour guide outfits.

Simon: She’d fit, that’s for sure! But actually, Rosalind and I got married in Malibu, Calif. and we had the reception to our wedding at the Disneyland Hotel. Twenty-five years ago.

Greg: No kidding! Have you guys ever been to Walt Disney World Resort in Florida?

Lenny Venito: I have. I’m from New York, so that’s our “Disneyland,” so to speak. I was born and raised in Brooklyn, N.Y., in Bay Ridge. You know what, I love going there with my niece — or with any kids, for that matter — because the look on their faces is something to remember. It’s like living my childhood over again.

Greg: What do you like best at the parks?

Lenny: I love all that stuff. I love roller coasters. I love all the fried dough. Big fan of the fried dough. That is my thing. I like how everything is in the shape of Mickey’s head! You get the waffle that looks like Mickey, you get the chocolate thing that looks like Mickey. All I’m doing is eating Mickey all day long and there’s nothing wrong with that!

Greg: (laughs) And you seem like such a sweet guy, Lenny! Now Simon, when you came to this country, didn’t it seem like another planet?

Simon: Yes, and it seems even more so after that conversation! If I get nervous, I still start coming out with English words and phrases, like the “bonnet and boot.”

Greg: Can you tell us a little bit about what’s coming later in this season?

Lenny: Yes, we’re going to see more about the relationship between Reggie — Larry Bird and Jackie’s son — and Amber, the daughter of Marty and Debbie [Jami Gertz].

Lenny: Also, Larry Bird recently got a job at a coffee shop called “Tanner’s Beans.” It’s actually named after the assistant to Dan Fogelman [creator of “The Neighbors” and co-writer of such movie hits as “Tangled” and “Cars“].

Greg: One of things my wife and I like about “The Neighbors” is that, as zany and wacky as the characters can be, none of them are portrayed as stupid.

Simon: I think our alien characters, and I’m sure Toks would agree, just don’t have all the information. It’s not that they’re dumb.

Greg: There is a deft and subtle sweetness to the show. It’s one of the nicest sitcoms of its kind that’s been on television in decades.

Lenny: I think you’re right when you say there aren’t a lot like it anymore. You used to have a lot of those family shows where everyone sits down, the parents and the kids and they each get something out of it. My favorite part is that sweetness, that heartwarming feeling you get from some of our shows. There’s an innocence to the Bird-Kersees as they learn about Earth, and to the Weavers as they grow as a family. We’re at our best when that all comes together.

Simon: Yet that sweetness is not too saccharin because of Dan Fogelman and our writers, who are very adept at balancing both. That’s the thing that first drew me to the series. The humor doesn’t feel mean spirited.

Lenny: All I know is that I love being Marty and if they keep letting me do it, I’m gonna keep doing it.

Greg: In our house it’s appointment TV. We all gather to watch it on Friday nights.

Simon: I love that.

Parents note: The Neighbors is rated TV-PG for language.