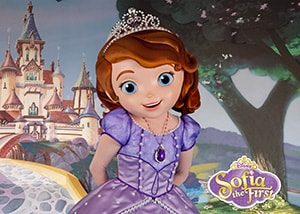 It’s hard to believe that Disney Junior Play ‘n Dine at Hollywood & Vine, the super fun character dining experience at Disney’s Hollywood Studios, is already in its eighth year! I have a lot of great memories of taking my boys there when they were younger, for a delicious breakfast or lunch and the chance for them to interact with some of their favorite Disney Junior characters.

Best of all, the experience at Play ‘n Dine has been updated over the years to include the newest characters, stories and music from Disney Junior shows on Disney Channel and the Disney Junior 24-hour channel.

Starting January 26, 2014, two of Disney Junior’s biggest stars will be coming out to play, when Doc McStuffins and Sofia the First join the cast of Disney Junior Play n’ Dine at Hollywood & Vine. Kids will get the chance to meet Doc and Sofia and dance along with them during a fun, new musical number right there in the restaurant!

Sofia the First and Doc McStuffins will be joining current favorites, Handy Manny and Jake from “Jake and the Never Land Pirates.”

With great character interactions and a tasty buffet, Disney Junior Play ‘n Dine at Hollywood & Vine offers something for every member of the family.