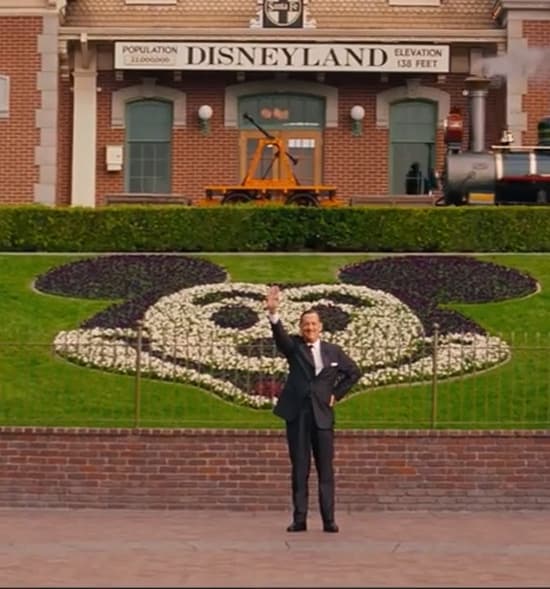 Author’s note: The story that follows originally ran in the Disneyland Line, a fantastic magazine published exclusively for Disneyland Resort cast members. I loved the story so much, I wanted to share it with you. Please enjoy the following, written by my friend, Senior Internal Communications Specialist Ralphie Giron.

In addition to Emma Thompson and Tom Hanks, the stars of the soon-to-be released “Saving Mr. Banks,” there’s a supporting role that shares the spotlight — Disneyland park.

The movie about Walt Disney (played by Hanks) and his mission to persuade “Mary Poppins” author P.L. Travers (played by Thompson) to allow him to turn his daughters’ favorite book into a movie includes scenes filmed at Disneyland park over two days in November 2012. But it was no easy task for Production Designer Michael Corenblith to transform modern-day Disneyland into the young park of the early 1960s for the Walt Disney Studios’ film. He worked with cast members, the film crew and Imagineers to recreate costumes, poster art, balloons — even the Floral Mickey — ensuring the movie would capture the period detail of 1961 Disneyland.

Imagineer Vanessa Hunt of the Walt Disney Imagineering Art Library worked with the film’s set decorator to determine which attraction posters would line the fence in front of the Floral Mickey.

She worked with fellow Imagineers Josh Shipley and Neil Jones to produce color-accurate reproductions of the posters. “Those posters are a part of our guests’ memories of visiting Disneyland, so we knew they had to look as good as they did in 1961.”

Disneyland Resort Enhancement played a critical part in recreating window displays that were representative of 1961 Disneyland.

“Back in the 1960s, the Emporium was a lease shop, and a bronze castle hung under the Elias Disney window on Main Street, U.S.A.,” said Chris Matinas, Disneyland Resort Enhancement. “In addition to recreating that piece, I had the task of sourcing historically accurate props to use in the window display.”

Disneyland Resort cast members were among the hundreds of extras who came out during filming in the park, portraying both cast and guests in the film. Clint Corwin, who works in Disneyland Resort Outdoor Vending, had the opportunity to sell balloons as an extra in the film.

“For me, being on set was the strangest feeling,” Clint said. “In one scene we walked to Fantasyland through Sleeping Beauty Castle, and it was present day on one side and 1961 on the other.”

Nick Vento, who works in Main Street Stores, also served as an extra — and is thrilled that his name will be on screen as the closing credits roll.

“It was amazing — to actually think that we were recreating something that was so important to our company,” Nick said, referring to the making of “Mary Poppins,” which was released in 1964 and won five of its 13 Academy Award nominations — an unsurpassed record for the Walt Disney Studios. While filming “Saving Mr. Banks,” Hanks stayed in character, even between takes, Nick said. “I had goose bumps,” Nick said. “He looked and spoke just like Walt.”

Now take a look behind the scenes of “Saving Mr. Banks” to find out how they brought 1961 to life here at Disneyland and at the Walt Disney Studios in Burbank, Calif.