Even as it begins to add its magic to your neighborhood theater, Disney’s new animated feature “Frozen” is already getting critical raves and Oscar buzz, particularly for its marvelous new songs. 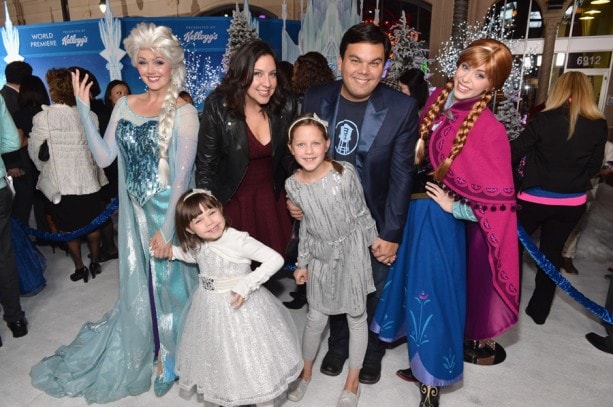 You’ll be delighted to learn “Frozen’s” songwriters, Kristen Anderson-Lopez and Robert Lopez, are not only among today’s top Broadway (and now Hollywood) composers, they’re also a doting mom and dad — and huge Disney Parks fans. In addition to “Frozen,” they wrote the songs for the 2011 Disney animated feature, “Winnie the Pooh,” “Finding Nemo—The Musical” at Disney’s Animal Kingdom and The Seas with Nemo and Friends at Epcot!

We caught up with Kristen and Bobby just as they were on their way to take their young daughters Anna and Katie (both of whom also can be heard in Frozen) to Disney California Adventure park to see “World of Color — Winter Dreams,” the new holiday edition of the nighttime water spectacular hosted by none other than Olaf, the lovable snowman from “Frozen.”

Greg Ehrbar: “As Disney fans yourselves, it must be surreal to hear your songs on Disney Parks attractions, films and now ‘Frozen.’”

Kristen: What’s funny, and I think helpful, is that we consume more Disney stuff than we create. Bobby keeps buying “Frozen” merchandise and filling our entire studio with all-things “Frozen.” Every day I ask, “Okay, what did you buy today?” and he says something like, “I got the two crowns!”

GREG: “’Finding Nemo—The Musical’ has such great songs. I love listening to the sound track album [available on iTunes]. The songs you both write so well have strong, memorable melodies. They’re very hummable and like the Sherman Brothers’ songs—and I mean this in the best possible way—they’re what folks call earworms, those tunes you can’t get out of your head.”

Robert: “Well, as a songwriter, one of your dreams is that people would be forced to listen to your song for a constant loop all day long! That’s basically what it means to get a song into an attraction, right?” (laughs)

GREG: “I recall that Walt Disney said something to the effect that ‘songs were the things that the people took with them after they left the theater.’”

Kristen: “Chris Montan [President of Walt Disney Music], who’s been doing this kind of thing very successfully for a very long time, was the person we looked to as our guide, both melodically and structurally. We called him ‘Gandalf’ because this was an epic journey. We really had to get that ring of Mordor and we had a very small window of time. Neither of us had ever done this kind of thing before, so we would turn to Chris.”

Robert: “And like Gandalf, he had a number of projects that he was doing at once so we didn’t always have him.”

Kristen: “Right. It was as if he’d have some sort of ‘Balrog’ thing to take care of and would have to be away … but upon his return, he would be ever so much stronger.”

Kristen: “…and so then, we finished the film!”

GREG: “You seem to have very eclectic tastes. The variety of styles in your songs for ‘Frozen’ reflect that.”

Kristen: “Definitely. I would say I have a little more of a foot in the top-40 world than Bobby, but he loves some of the classic pop hits and he’s a huge Billy Joel fan. That’s how he gets the girls. That’s how he got me.”

GREG: “When you take the girls to Disney Parks in Florida and California, what are the must-see attractions for you?”

Kristen: “Well, the Finding Nemo ones, of course!”

Robert: “That was the one that really established us as a family of Disney Park goers. When our daughter was between the ages one-and-a-half to two, she spent pretty much that time at Disney. So we were a tried-and-true Disney family by the end of that. We always try to go to Expedition Everest in Florida, that’s our favorite coaster-type ride.”

Kristen: “And there’s so much great music at Epcot.”

Kristen: “Soarin’ is amazing. And I love the Spaceship Earth music as you head up into space.”

Robert: “We go to ‘it’s a small world’ every time. That’s a song that rings true with us. As songwriters we see it as the happiest song ever, but when you hear Richard Sherman play it softly and soulfully…”

Robert: “Yeah, how deep it is. The whole thing is a beautiful experience.”

Kristen: “I was a huge fan of the original Journey Into Imagination song, too.”

Robert: “We love The Enchanted Tiki Room, Pirates of the Caribbean, we love it all.”

Kristen: “Oh, and let me tell you something else, Greg. Just for fun I have an app on my phone that shows the Disneyland ride waiting times. Every once in awhile I’ll be in a meeting or something, and I’ll just go on the app and see that it’s 90 minutes to get on to Radiator Springs Racers, or it’s five minutes for Heimlich’s Chew Chew Train, or – ”

Kristen: “It does sound corny but it’s true—we remind ourselves everyday to be mindful of being grateful to be in this position.”