Steampunk and Disney fans alike, this one’s for you! On February 22, The Disney Gallery at Disneyland park will unveil a new exhibit titled Mechanical Kingdoms ~ Steam-Driven Visions of a Victorian Future.

Steampunk, a subgenre of science fiction loosely built around retro-futuristic visions of a steam-powered society, has been gaining (pardon the pun) steam over the past several years. The movement, which is expressed culturally and stylistically in everything from technology and design to music and fashion, was dubbed steampunk in the late 1980s. Though certainly not part of the steampunk “wave” (at least not consciously), Walt Disney Imagineers have been creating their own visions and versions of retro-futuristic technologies since well before that time, incorporating them into Disney Parks and attractions around the world. 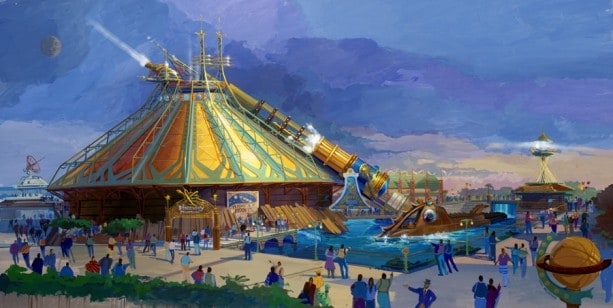 Mechanical Kingdoms ~ Steam-Driven Visions of a Victorian Future features conceptual designs and ideas for an array of inventive vehicles, machines and gadgets. The collection also shares some of the same inspirations as steampunk – most prominently a fascination with the extravagantly inventive visions of tomorrow expressed by such Victorian futurists as Jules Verne and H.G. Wells. So don your petticoats and bustles or your suits and old military storm coats, pull on your brass goggles and get ready for an adventure that takes us forward into the past, as seen through the eyes of Disney artists and designers.

Here’s one piece that was actually done in collaboration with several of the artists, and for me, kind of tells the story of Steampunk and what you can expect to see.

Of course, it was hard to pick one piece of art to show you, so I convinced the team to let me show you at least one piece from each artist. Take a look!

If you are a fan of Steampunk then mark your calendar now, because as part of the Steampunk launch, we will host artist signings at Disneyland Resort and Walt Disney World Resort.

For event information and to see more images being released as part of the events, visit the event section of www.DisneyParksMerchandise.com.