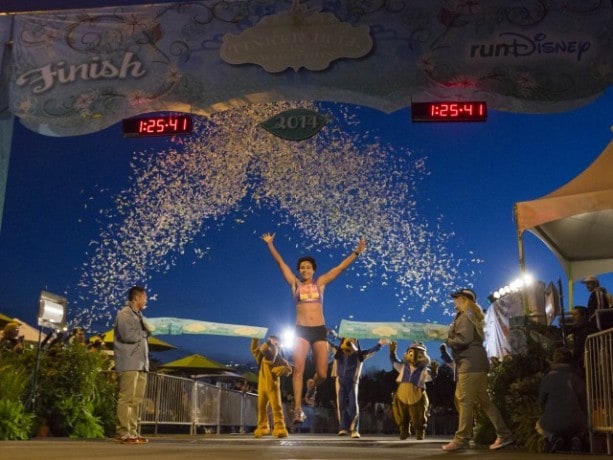 The 29-year-old runner from Oxnard, Calif., is an experienced endurance runner, but as much as she tried, she had never been able to finish first in a half marathon. That is, until she came to Disneyland Resort this weekend and undoubtedly was doused with a little pixie dust somewhere along the way. Running her first Tinker Bell Half Marathon, Hernandez did what she had never been able to do before, leaving the field behind in a trail of … well, pixie dust, to win the 13.1-mile race Sunday.

Not only was it her first half marathon victory, but it came at the biggest half marathon event she said she had ever undertaken. She somehow outran a field of more than 15,000 runners from across the country and beyond to earn her “wings” and a gold Tinker Bell finishers medal. And she did it in impressive fashion – her winning time of 1:25:40 was the third-fastest in the race’s three-year history.

Who says this isn’t the place Where Dreams Come True?

“I had finished second in a few half marathons, but I had never won one,” said Hernandez. “And I had never run in a race this big before either, so it was really nice to win my first one here.” Hernandez’s win capped a magical weekend of race events that included a new Disneyland 10K, a Never Land Family Fun Run 5K, several runDisney Kids Races, a Pasta Party and a health and fitness expo. In all, more than 30,000 runners participated in the various weekend race events, making this one of the largest women-focused race weekends in the country.

If you want to try to make your running dreams come true like Hernandez, registration for the Disneyland Half Marathon opens January 28 at www.runDisney.com.