With so many new destinations for Disney Cruise Line in Europe this summer, the past several months have been very busy for me as I’ve worked with my team and tour operators in each port to design shore excursions like only Disney can do. Over the next several weeks, I’ll be sharing some of the new Port Adventures with you, starting today with a few in Sicily.

An autonomous region of Italy, Sicily is the largest island in the Mediterranean. Looking at a map, it’s the island that looks like it’s being kicked by the “boot” of Italy. One of the distinctive geographical features of the island is Mount Etna, the tallest active volcano in Europe.

For the first time ever in 2014, Disney Cruise Line will call on Sicily’s port in Catania, the gateway to exploring the island’s ancient churches, beautiful palazzos, lush gardens, magnificent beaches and of course, Mount Etna. I know Disney cruisers will be thrilled with their Port Adventure options on this unique island!

Mount Etna Summit – Families who enjoy active adventures will love summiting the top of Mount Etna. The journey begins with a drive through the beautiful countryside and villages built along the slopes, followed by a cable car ride further up the volcano. From there you’ll be driven by alpine guides in special motor vehicles equipped to navigate the “lunar“ landscape of black dunes to the highest point available for visitation, which is just under the summit. At approximately 8,859 feet above sea level, you’ll have the chance to walk around, observing possible steam/gases and learning about the volcanic system apparatus and lava flows. 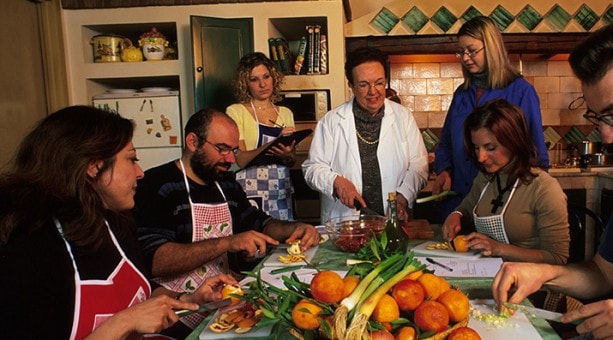 Cooking Lesson at a Sicilian Home – There’s no better way to immerse yourself in the culture than to go into the home of a local! There you’ll get a hands-on cooking demonstration on how to prepare delicious Sicilian dishes before indulging in your creations. This adventure, which takes place in one of the picturesque villages on the slopes of Mount Etna, is a must-do for adults and older teens who love cooking (and eating!) We also have another adventure called “Sicilian Cooking for Families” for those of you with younger children.

Sicilian Puppets for Families – Many of our excursions in Sicily are family-friendly, but I am most excited about this one designed especially for those traveling with kids. After a visit to a Puppet Lab to see how the famous Sicilian puppets are built, your family will learn the history of this folkloric art and enjoy a portion of a show at the Puppet Museum. Adding to the cultural experience, you’ll hear the beautifully articulated, theater-style presentation in Italian while your English-speaking guide gives a synopsis of the intricate moves of the onstage scene.

I hope you enjoyed this sampling of the many unique experiences your family can have together in Sicily. As I always say, when the ship’s in port, be sure to venture ashore!