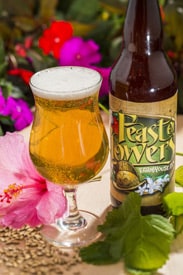 Instead of photos of the gorgeous flowers and topiaries, we want to show off some of the delicious new delights for your taste buds at the 21st annual Epcot International Flower & Garden Festival that opens March 5 and runs through May 18 – that’s 75 days to take it all in.

Last year was the first year that food starred alongside the flowers, and this year 11 Outdoor Kitchens debut around World Showcase Lagoon, each with an artful produce and herb-raised garden bed that showcases something that you can taste in the dish they’re offering, say, corn at the Florida marketplace, or pineapples in Japan.

Chef Jens Dahlmann had fun with the new Urban Farm EATS with its sustainable garden featuring tilapia swimming around that help fertilize the veggies. All three dishes are gluten free and two are vegetarian. There’s a pickled beet salad with goat cheese cream, mizuna (greens) and pistachios, eggplant grown at The Land pavilion at Epcot with Romesco (sweet pepper sauce) and spaghetti squash, and a ghost-pepper-dusted tilapia with crisp melon slaw and mint oil – and if you’ve never tried ghost pepper, it’s a kicky treat. They even have a vegan chardonnay and cabernet sauvignon and a gluten-free beer.

In all there are 16 vegetarian dishes and a dozen gluten-free choices. Each marketplace has three to four dishes, adding up to more than 50 beverages and 40 different food items. It’s your chance to try anything from pulled-duck confit with garlic and parsley potatoes in France to a “piggylicious” bacon cupcake with maple frosting and pretzel crunch at The Smokehouse: Barbecues and Brews. Craft beers abound again this year, from a Tropical Mango Pale Ale from St. John Brewers in the U.S. Virgin Islands to Feast of Flowers Farmhouse Ale brewed right here in Florida just for the festival.

Get a full rundown of what’s being offered at each Urban Kitchen as well as information on all the other fun things to do at epcotinspring.com.