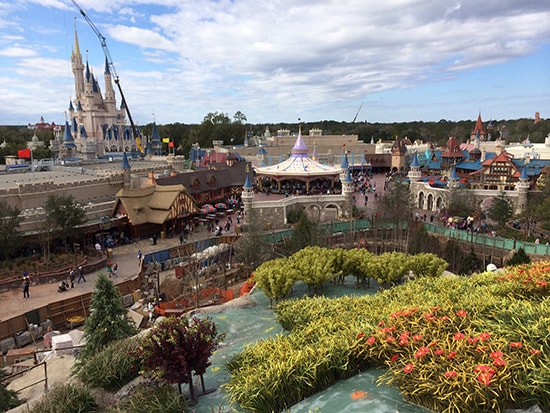 On opening day, the Disney Parks Blog showed how Kermit and Miss Piggy are appearing in topiary form with a special behind-the-scenes video. Both can be found between the Italy and the Germany pavilions with a display inspired by the new movie Disney’s “Muppets Most Wanted.”

The Flower Power Concert Series also returned this weekend at Epcot. Upcoming acts include two bands making their debut Flower Power Concert performance: Gary Lewis and the Playboys (“This Diamond Ring”) and The Alan Parsons Live Project (“Eye in the Sky”). Performances are included in park admission and take place Friday through Sunday at 5:30, 6:45 and 8 p.m.

We have more details, including how to find out what’s on the menu in our original post.

And did you see the latest story in our exclusive “All in the Details” series? We featured some amazing images from the top of Seven Dwarfs Mine Train in New Fantasyland at Magic Kingdom Park. The photos are a first look at what the view will be like from atop the newest Disney “mountain.”

Seven Dwarfs Mine Train will open to guests later this spring. Be sure to keep checking the Disney Parks Blog for more information.

Under the Sea With Supplied-Air Snorkeling in Rainbow Reef at Aulani, a Disney Resort & Spa – At Aulani Resort’s Rainbow Reef, you can get up-close to nearly 50 different types of sea life native to Hawai`i!

The Magic of Disney Parks Storytelling: Indiana Jones Adventure at Disneyland Park – Have you braved The Temple of the Forbidden Eye? Learn the story behind this famous attraction at Disneyland park.

Celebrating Life at the Walt Disney World Half Marathon – I runDisney – Watch the story of Dominic Alexander, who recovered from a traumatic injury run along side his brother in a half-marathon.