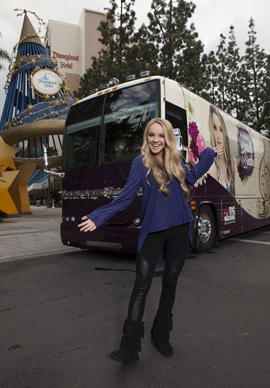 Disney Performing Arts is ‘On the Road’ This Week

The Music In Our Schools national tour launched at the Disneyland Resort yesterday, with 17-year-old country-music sensation Danielle Bradbery off to visit high schools in five cities – Albuquerque, Houston, Oklahoma City, Nashville and Charlotte – before the tour wraps up at Walt Disney World Resort on March 8. Our Disney Performing Arts team is thrilled to sponsor this week-long event that celebrates the importance of music education and the benefits music teachers bring to their students and school communities. 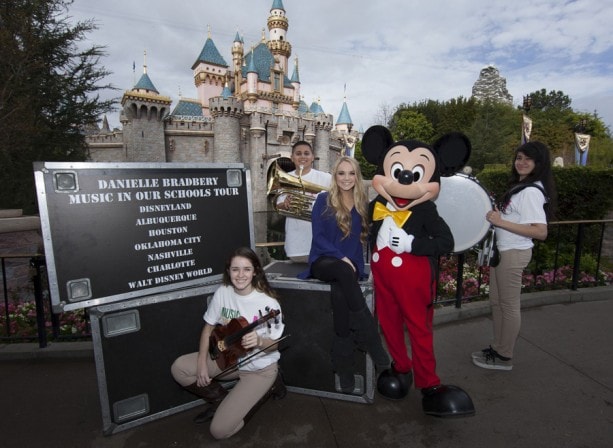 Danielle is a great tour spokesperson, since she’s living the dream of so many participants in our Disney Performing Arts programs by performing live in front of thousands of people. Originally gaining fame as winner of The Voice, season four, Danielle added to that success with the release of her first self-titled album and her single “My Day,” which was a signature song leading up to the 2014 Winter Olympics.

At each high school Danielle will talk about her personal journey, participate in a question-and-answer session and perform songs from her new album. One of our Disney Ambassadors will also be at each high-school event, serving as co-host and emcee.

The Music In Our Schools tour is a collaboration with the National Association for Music Education (NAfME) and Big Machine Label Group. Our team chose to be involved because Disney Parks has had special affinity for music education since 1955. That’s when Walt Disney personally invited California high schools to perform at the grand opening of Disneyland park.

What Walt knew then is still true today – the company he founded relies on the talents of musicians, composers and other artists across its many businesses every day. And it wouldn’t surprise me if future Disney musicians say they got their career inspirations from the Music In Our Schools tour.

Be sure to check the Disney Performing Arts Facebook page for all the latest tour happenings.