Indiana Jones Adventure: The Temple of the Forbidden Eye opened on March 3, 1995, at Disneyland park and became an instant classic. The detail and storytelling in the attraction puts it at the top of my list whenever I visit the Disneyland Resort. So let’s continue one of my favorite Disney Parks Blog series with the story behind this adventurous attraction. 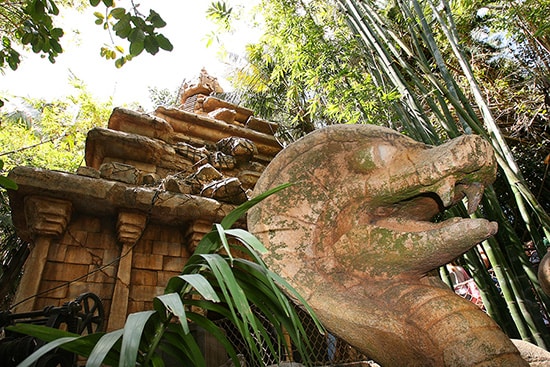 Indiana Jones Adventure takes guests back to the year 1935 with famed archeologist Dr. Henry “Indiana” Jones, who has uncovered the Temple of the Forbidden Eye. This mysterious temple was built long ago by a lost civilization in honor of the ancient deity, Mara. Lore says that Mara has the power to look into one’s soul and grant one of three gifts: earthly riches, eternal youth or knowledge of the future. But it was soon discovered that those who look into the eyes of Mara are doomed to suffer the deity’s vengeful wrath! But that hasn’t kept away the tourists, celebrities and fortune hunters who have flocked to the temple, lured by the promise of Mara’s gifts.

Fortunately for us, Dr. Jones has temporarily disabled the lethal booby traps along the path leading into the temple, allowing us to safely reach the boarding area, where his friend Sallah has commandeered a small fleet of transports to take us on a tour of the temple. Let’s take a look inside some of the key areas of the temple:

Chamber of Destiny: This the first stop on the tour. Here, Mara peers into our souls to see which of the three gifts we truly desire. Unfortunately, one of the passengers in our transport (never me, I swear) inevitably gazes into Mara’s eye, unleashing his fury.

Tunnel of Torment: The once-pristine architecture starts to decay and crumble as the power of Mara lifts the vehicle from its path and carries it through the air. Everything in the tunnel seems to move with us as our transport strains against the evil force that propels it forward.

Gates of Doom: “You had to look, didn’t you?” Dr. Jones exclaims as he tries to hold back the evil forces at the gates, breaking the curse just long enough for our transport to drop back down to the temple floor, allowing us to pass. 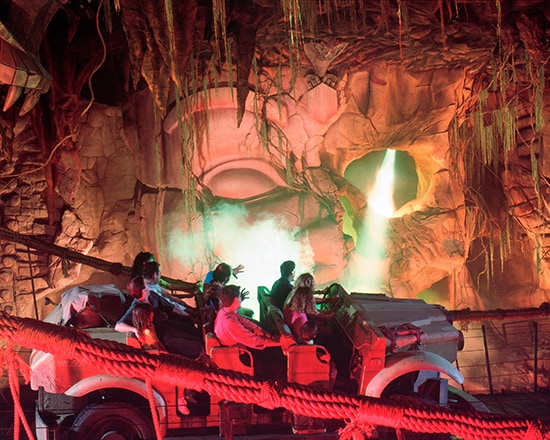 Cavern of Bubbling Death: But the way out isn’t so easy. Here we make our way through this massive subterranean chamber. As we enter the cavern, the 45-foot-tall decaying statue of Mara fires a beam at the vehicle, causing the ceiling to crumble and fall into the flaming gorge, sending us to escape through a side chamber.

Of course, from there the adventure continues … for those who have not yet journeyed into the Temple of the Forbidden Eye, I will not give away what happens next.

For the first several years the attraction was open, riders received a decoder card for the Maraglyphics found inside the temple. Thanks to my friends at the Walt Disney Imagineering Art Library, I’ve got the decoder card for you below – try to decode some messages yourself the next time you visit!