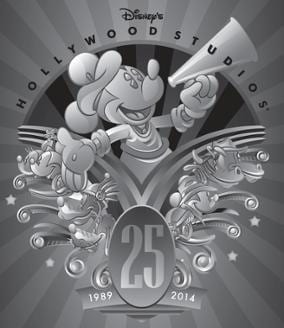 In a park that pays tribute to many Hollywood icons of the silver screen, a silver anniversary is a special one to celebrate. On May 1, 1989, Disney’s Hollywood Studios (known then as Disney-MGM Studios — a name that would identify the park until it was changed in 2008) became the third Disney theme park to open at Walt Disney World Resort. On May 1, 2014, the park will mark its 25th anniversary in several ways (*times and entertainment subject to change):

Special events and entertainment for the celebration are included in regular park admission to Disney’s Hollywood Studios.

Also, as previously outlined by fellow Disney Parks Blog author Steven Miller, 25th anniversary commemorative merchandise will be sold (while supplies last). And finally, a taste-tempting treat — a 25th Anniversary Chocolate Nutella Cupcake — will be sold at many of the park’s quick service dining locations during the day.

TIP: If you’re planning to visit the park on May 1, please plan on entering via the main toll plaza off of World Drive.