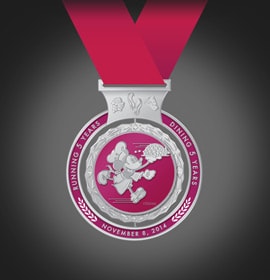 As runners start to plan their fall and winter race schedules, we thought it would be fun to provide some extra motivation and reveal a little “bling.” Disney Yellow Shoes Art Director David Brotherton has been busy designing two amazing finisher medals to celebrate the 5th anniversary of the Wine and Dine Half Marathon and the 10th anniversary of the Goofy Race and a Half Challenge.

The Wine and Dine anniversary medal captures the essence of the race with color and design, and features a spinner at the heart of the medal. One side represents the tradition of past medals and is inspired by Spaceship Earth, while the other side showcases chef Mickey on the run. A fitting reward to those taking on the sold-out half marathon in November.

Registration for the 2015 Walt Disney World Marathon presented by Cigna opens on April 22 and we are thinking this Goofy Challenge anniversary medal might be just enough to get some people thinking a little, well, Goofy. After all, running a half marathon on Saturday and a marathon on Sunday puts you in a unique category. Looking at the medal there is no doubt we are celebrating the 10th anniversary. Featuring traditional Goofy colors, this medal also has a spinner in the middle. One side celebrates the accomplishment of the half marathon, and when you spin it, Goofy turns upside down and lets you know you added on another 26.2 miles, a grand total of 39.3 miles over two days. Goofy.

runDisney is proud of all our finisher medals and think these anniversary medals will excite our runners and be something they will be proud of earning when they cross the finish line.