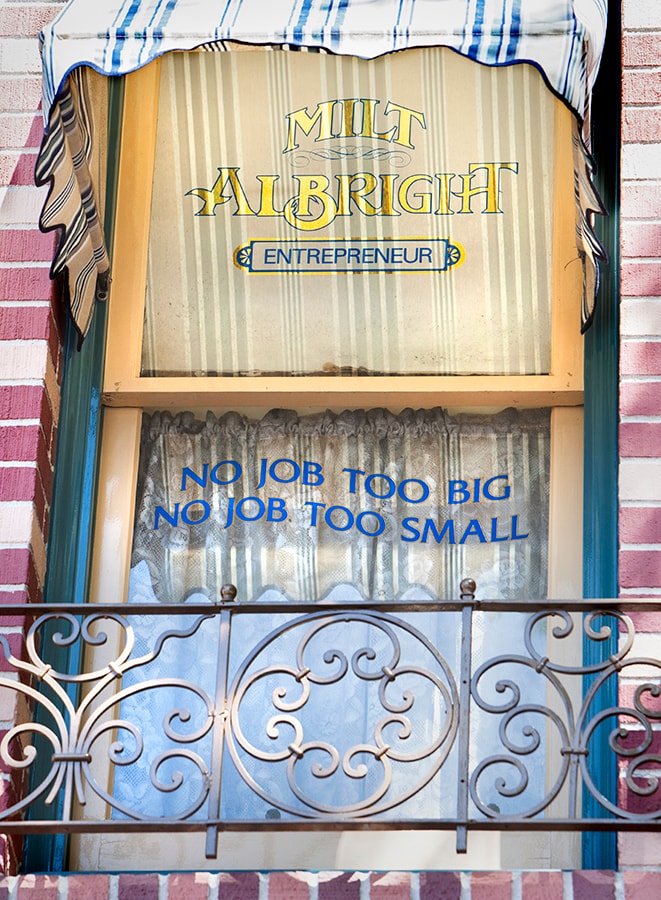 With the passing of Disney Legend Milt Albright last week, I thought it would be fitting to pay tribute to him and highlight a few of the many successes of his 45-year career with Disney. Milt always said his luckiest day was June 19, 1947 – the day he achieved his goal to work for Walt Disney. It all started 10 years earlier, in December 1937, when he saw a Time magazine cover story featuring fellow Missourian, Walt Disney. He knew then and there that it was his destiny to work for The Walt Disney Company.

Milt was born in Kearney, Mo., on June 7, 1916. He was the oldest of three boys and grew up on the family farm north of Kansas City. When Milt was a young man, a friend of his father paid him to deliver a car to Los Angeles. He fell in love with the area and decided to make Southern California his home.

Milt joined the Walt Disney Studios in 1947 as a junior accountant. Working in the Payroll Department, he was entrusted with the job of preparing and delivering paychecks for top executives, which brought him into direct contact with both Walt and Roy Disney.

By 1953, the self-described “poor accountant” had another goal – he wanted to be involved with the development of Walt’s new “amusement” park in Anaheim. In an attempt to gain attention from Walt, Milt, an automobile buff, designed a miniature car using a 1954 Corvette as his model for what would eventually become the Autopia attraction. Walt was intrigued by the fiberglass auto and took it for a drive before Milt could explain that it was not finished – it had no brakes.

“Well, Walt crashed into a wall to stop it and the body of the car split in half like a walnut,” Milt recalled in a 1987 interview with the Anaheim Bulletin. While Walt was not impressed with the car, he did take note of Milt.

In the spring of 1954, Milt was hired as manager of accounting for Disneyland. “I got to come down here because they wanted somebody they could trust,” said Milt. “Didn’t have to be very smart – just honest.” Milt hung a framed organizational chart in his office that was the first such chart for the park. It was dated July 1, 1954, and had 17 “employees” on it including Milt, Walt and Ron Miller, who eventually became president of Walt Disney Productions.

In 1957, Milt became manager of Holidayland, a private party and picnic area (near the area that is now Critter Country) designed for group events. In 1958, he transferred to Group Sales where he founded one of the most innovative and successful in-house marketing programs ever conceived. It was called the Magic Kingdom Club, and it offered discounts and special admission tickets to card holders. At its peak, the Magic Kingdom Club boasted nearly 6 million members associated with more than 30,000 companies worldwide. Milt also extended the private party concept to Grad Nite. The first Grad Nite, held on June 15, 1961, was one night only with about 8,000 graduates from 30 local high schools in attendance. The Grad Nite program continues to be successful today and remains a popular tradition for many Southern California graduates.

In the late 1970s, Milt became manager of special projects for Marketing. He was later promoted to manager of Guest Communications, a position he held until his retirement in 1992.

Upon his retirement on July 17, 1992, Milt said, “I had the enormous good fortune to be hired by the finest entertainment company in the world. I believed it then, and I believe it still. Based on a lifetime with Disney, I would say with great conviction to any young person that you’ll never find a better place to start. Tough out the lean early years, learn Disney teamwork and don’t be afraid to innovate … to come up with new ideas. I’ve had 45 years of challenge and some success in Marketing because I took a chance and built an Autopia prototype car for Walt.”

Milt was honored with a window on Main Street, U.S.A., in 1992. The window, located above The Mad Hatter, highlights Milt’s innovative business sense and his ambition to take on any project: Milt Albright, Entrepreneur, “No Job Too Big – No Job Too Small.”

Milt was named a Disney Legend in 2005 for his significant contributions to Walt Disney Parks and Resorts. He passed away on April 7, at the age of 97.