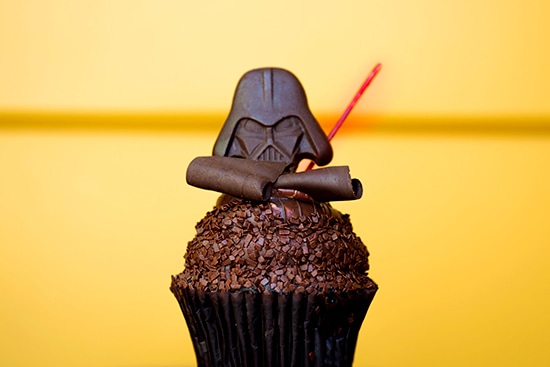 This week on the Disney Parks Blog, we celebrated the launch of Star Wars Weekends 2014 at Disney’s Hollywood Studios with new themed header images as well as stories featuring this year’s artwork, gift cards and merchandise at Darth’s Mall. We also shared a special look at a Darth Vader cupcake consumed by the dark side in the pastry display case.

If you enjoyed our Darth Vader cupcake video, check out the behind-the-scenes look at how we did it.

Star Wars Weekends takes place every Friday, Saturday and Sunday from May 16 – June 15, 2014. Most event activities are included in regular theme park admission.

Also this week, tickets for our holiday parties went on sale at the Walt Disney World Resort.

More ‘Frozen’ Fun at Disneyland Park This Summer – Look for Olaf, Anna and Elsa in a special pre-parade each day at Disneyland park, appearing just ahead of performances of Mickey’s Soundsational Parade!

Goofy’s Glaciers Climb to the Top of Frozen Treats at Disneyland Resort – Cool off with this frozen treat, available in Cherry or Blue Raspberry flavor!

Experience Majestic Views of the Grand Canyon with Adventures by Disney – Discover the beauty of Grand Canyon National Park and Arches National Park, raft the Colorado River or take a four-wheel drive adventure. Click through for details!